WQRF issues RFP for study on contaminants between MCL and MCLG

When I saw the headline above I knew I was going to have to learn some new acronyms. Just last week we put up an article about the difficulty writers and readers and researchers are having with the many new abbreviated forms used for “emerging contaminants” that start with “P.”  The world is being overrun by acronyms, and the water treatment industry creates way more than its share.

Then, I learned from the Wikipedia that RFP stands for “request for proposal.”   The RFP  is a “document that solicits proposal, often made through a bidding process, by an agency or company interested in procurement of a commodity, service, or valuable asset, to potential suppliers to submit business proposals.”

I already knew what MCL and MCLG mean, but to be sure I understood them in the context of the WQRF’s RFP,  I looked them up:

MCL stands for Maximum Contaminant Level: the highest level of a contaminant that is allowed in drinking water. MCLs are set as close to the maximum contaminant level goals (MCLG) as feasible using the best available TT (Treatment Technology).

MCLG stands for  Maximum Contaminant Level Goal: the level of a contaminant in drinking water below which there is no known or expected risk to health. MCLGs allow for a margin of safety.

Here’s how the project goal itself is stated in the article:

This study is the first attempt at collecting and analyzing national occurrence data between the MCL and MCLG, utilizing data that is available from state and federal databases including, but not limited to: EPA, CDC, USGS, FRDS, NCOD, and SDWIS. Of the contaminants governed by the National Primary Drinking Water Regulations, only those that have a MCLG value lower than its MCL value (including MCLG values of “zero”) will be included in this research.

FRDS, NCOD, and SDWIS, which I didn’t understand, I decided to leave it alone. You don’t have to know everything. 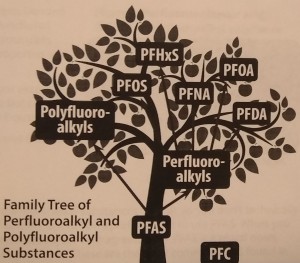 In regard to the “P” word contaminants that we went to so much trouble trying to classify, this very week, the Agency for Toxic Substances and Disease Registry (ATSDR), apparently a division of the CDC (Centers for Disease Control), seeing the urgent need to get everyone on the same page so these chemicals can be talked about, issued a very helpful document called The Family Tree of Perfluoroalkyl and Polyfluoroalkyl Substances (PFAS) for Environmental Health Professionals.  I hope you’ll read it. It keeps things simple by showing only the main PFAS family and leaving off the subfamilies. It also drops one confusing acronym, PFC, from the tree, pointing out that PFC stood for perfluorinated chemicals and also for perfluorocarbons. They do not mention that it also stands for Private First Class, which probably confused lots of people. PFC shows on the picture above as a fallen apple.

One very edifying part of the Family Tree, though, is the clarification of the singular/plural issue. I learned I’ve been making some pretty dumb statements (as have most of the people who write about PFAS).  According to the ATSDR, PFAS is plural, so you shouldn’t add an “s” to it and write PFASs, as many, including me, have done. Putting an “s” on PFAS is like saying, “My uncle has three childrens and they all wear red hatss.”

We live and learn.

The Family Tree of PFAS.