Perfluorinated chemicals and polyfluoroalkyl substances: What are we going to call them? 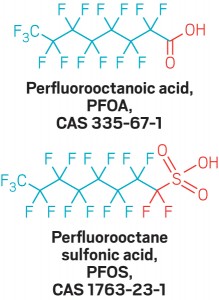 One of the hardest things about understanding the “emerging” water contaminants that come from firefighting foams, certain food packaging, non-stick cookware, treated clothing, etc. is figuring out what to call them.  Terms like perfluorooctane, polyfluoroalkyl and perfuoorooctanic acid don’t roll off the tongue easily.

To simplify things, we normally resort to acronyms.  It’s easier to say TCE than Trichloroethylene and everyone has caught on that THMs stands for Trihalomenthanes. However, with these new chemicals acronyms only seem to muddy the water. There are just too many chemicals (way too many to count at this point) with too many names and there are too many ways to classify them. They almost all start with “P” but “P Words” doesn’t seem like a good thing to call them.

We, at PWP (Pure Water Products), have been calling them PFCs, which stands for Perfluorinated Chemicals, as an umbrella term to categorize them under. This seemed reasonable enough to us,  but as the WQA (Water Quality Association) list below indicates, PFCs can be ambiguous.

A recent WQA  presentation created to educate its members put out some rules for naming and classifying these chemicals.  Here are the main things to remember:

PFO and PFOS do not fall under perfluorocarbons.

PFASs can be an abbreviation for either: per-  or polyfluoroalkyl substances.

Currently, the CDC ( Centers for Disease Control)  is using PFCs for perfluorinated chemicals and the EPA (Environmental Protection Agency)  is using PFOS to collectively describe PFOA and PFOS and other chemicals in this group.

The WQA itself uses PFASs as an umbrella term.

Other terms you hear include PFNAs, which stands for perfluorononanoic acids, which are part of the larger PFAS group.

Then, to complicate things further, there is the much publicized GenX, also know as C8, which was created by DuPont as a purported less harmful version of PFOA.  Rogue terms like GenX and C8, of course, made our initial PWS (P Word Substances) plan unusable.

PFCs is what we were using as an umbrella term until the WQA pointed out that PFCs can be ambiguous and declared it should be PFASs. To compromise, we’ve renamed our article category for the P contaminants PFCs,PFASs, hoping to please as many acronymed authorities as possible and to be as visible as possible to web searches.