Where Is Dick Cheney?

Where is Dick Cheney, now that We Really, Really

The Oil Crisis in the Gulf Rages On.

“Where have you gone, Joe DiMaggio?
A nation turns its lonely eyes to you.”

Editor’s Note:  Tiger Tom wrote this piece smack in the middle of the BP Oil Dilemma in the Gulf.

Dick Cheney has always been there when America needed him.

But now, when we have a hole in the Gulf floor that’s spewing oil with the fury of ten thousand galloping horses, Dick Cheney has dropped out of sight.

I, Tiger Tom, ask you if it is reasonable to expect Barack Obama to fix an oil leak.  What does Barack Obama know about oil leaks?

But Dick Cheney has been an oil man all his life.  He was director of Halliburton,  the biggest oil well fixer on earth.  If Dick Cheney can’t fix a leaky oil well, who can?

It is time for America’s hero to do his stuff. 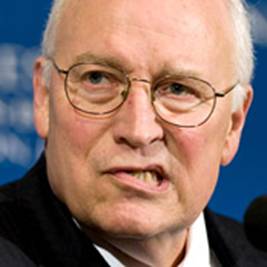 So I, Tiger Tom, propose that Dick Cheney be flushed out of his hiding place and encouraged by a red-hot poker applied to his slimy ass to dive to the bottom of the Gulf of Mexico, plunge his snarling puss into the hole in the pipe, and plug the leak with his head.

That’s my plan for fixing the leak.  Do you have a better one?

Back to the Pure Water Gazette.