Gulf Oil Spill: A Hole in the World by Naomi Klein

Gulf Oil Spill: A Hole in the World

–The Guardian published a superb comment on the Gulf oil disaster by noted researcher Naomi Klein. The article is a moving look at various dimensions of the 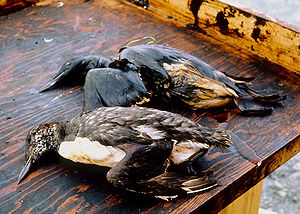 tragedy that have been ignored by the conventional media. We’re printing only the final segment of the article, “Make the bleeding stop,” but we urge you to read the entire essay in the original Guardian version. This article appeared during the time when the well was still dumping oil into the Gulf.–Hardly Waite, Editor, Pure Water Gazette.

Obama cannot order pelicans not to die (no matter whose ass he kicks). And no amount of money – not BP’s $20bn, not $100bn – can replace a culture that’s lost its roots.–Naomi Klein.

Thankfully, many are taking a very different lesson from the disaster, standing not in wonder at humanity’s power to reshape nature, but at our powerlessness to cope with the fierce natural forces we unleash. There is something else too. It is the feeling that the hole at the bottom of the ocean is more than an engineering accident or a broken machine. It is a violent wound in a living organism; that it is part of us. And thanks to BP’s live camera feed, we can all watch the Earth’s guts gush forth, in real time, 24 hours a day.

John Wathen, a conservationist with the Waterkeeper Alliance, was one of the few independent observers to fly over the spill in the early days of the disaster. After filming the thick red streaks of oil that the coast guard politely refers to as “rainbow sheen”, he observed what many had felt: “The Gulf seems to be bleeding.” This imagery comes up again and again in conversations and interviews. Monique Harden, an environmental rights lawyer in New Orleans, refuses to call the disaster an “oil spill” and instead says, “we are haemorrhaging”. Others speak of the need to “make the bleeding stop”. And I was personally struck, flying over the stretch of ocean where the Deepwater Horizon sank with the US Coast Guard, that the swirling shapes the oil made in the ocean waves looked remarkably like cave drawings: a feathery lung gasping for air, eyes staring upwards, a prehistoric bird. Messages from the deep.

And this is surely the strangest twist in the Gulf coast saga: it seems to be waking us up to the reality that the Earth never was a machine. After 400 years of being declared dead, and in the middle of so much death, the Earth is coming alive.

The experience of following the oil’s progress through the ecosystem is a kind of crash course in deep ecology. Every day we learn more about how what seems to be a terrible problem in one isolated part of the world actually radiates out in ways most of us could never have imagined. One day we learn that the oil could reach Cuba – then Europe. Next we hear that fishermen all the way up the Atlantic in Prince Edward Island, Canada, are worried because the Bluefin tuna they catch off their shores are born thousands of miles away in those oil-stained Gulf waters. And we learn, too, that for birds, the Gulf coast wetlands are the equivalent of a busy airport hub – everyone seems to have a stopover: 110 species of migratory songbirds and 75% of all migratory US waterfowl.

It’s one thing to be told by an incomprehensible chaos theorist that a butterfly flapping its wings in Brazil can set off a tornado in Texas. It’s another to watch chaos theory unfold before your eyes. Carolyn Merchant puts the lesson like this: “The problem as BP has tragically and belatedly discovered is that nature as an active force cannot be so confined.” Predictable outcomes are unusual within ecological systems, while “unpredictable, chaotic events [are] usual”. And just in case we still didn’t get it, a few days ago, a bolt of lightning struck a BP ship like an exclamation mark, forcing it to suspend its containment efforts. And don’t even mention what a hurricane would do to BP’s toxic soup.

There is, it must be stressed, something uniquely twisted about this particular path to enlightenment. They say that Americans learn where foreign countries are by bombing them. Now it seems we are all learning about nature’s circulatory systems by poisoning them.

In the late 90s, an isolated indigenous group in Colombia captured world headlines with an almost Avatar-esque conflict. From their remote home in the Andean cloud forests, the U’wa let it be known that if Occidental Petroleum carried out plans to drill for oil on their territory, they would commit mass ritual suicide by jumping off a cliff. Their elders explained that oil is part of ruiria, “the blood of Mother Earth”. They believe that all life, including their own, flows from ruiria, so pulling out the oil would bring on their destruction. (Oxy eventually withdrew from the region, saying there wasn’t as much oil as it had previously thought.)

Virtually all indigenous cultures have myths about gods and spirits living in the natural world – in rocks, mountains, glaciers, forests – as did European culture before the scientific revolution. Katja Neves, an anthropologist at Concordia University, points out that the practice serves a practical purpose. Calling the Earth “sacred” is another way of expressing humility in the face of forces we do not fully comprehend. When something is sacred, it demands that we proceed with caution. Even awe.

If we are absorbing this lesson at long last, the implications could be profound. Public support for increased offshore drilling is dropping precipitously, down 22% from the peak of the “Drill Now” frenzy. The issue is not dead, however. It is only a matter of time before the Obama administration announces that, thanks to ingenious new technology and tough new regulations, it is now perfectly safe to drill in the deep sea, even in the Arctic, where an under-ice clean up would be infinitely more complex than the one underway in the Gulf. But perhaps this time we won’t be so easily reassured, so quick to gamble with the few remaining protected havens.

Same goes for geoengineering. As climate change negotiations wear on, we should be ready to hear more from Dr Steven Koonin, Obama’s undersecretary of energy for science. He is one of the leading proponents of the idea that climate change can be combated with techno tricks like releasing sulphate and aluminum particles into the atmosphere – and of course it’s all perfectly safe, just like Disneyland! He also happens to be BP’s former chief scientist, the man who just 15 months ago was still overseeing the technology behind BP’s supposedly safe charge into deepwater drilling. Maybe this time we will opt not to let the good doctor experiment with the physics and chemistry of the Earth, and choose instead to reduce our consumption and shift to renewable energies that have the virtue that, when they fail, they fail small. As US comedian Bill Maher put it, “You know what happens when windmills collapse into the sea? A splash.”

The most positive possible outcome of this disaster would be not only an acceleration of renewable energy sources like wind, but a full embrace of the precautionary principle in science. The mirror opposite of Hayward’s “If you knew you could not fail” credo, the precautionary principle holds that “when an activity raises threats of harm to the environment or human health” we tread carefully, as if failure were possible, even likely. Perhaps we can even get Hayward a new desk