Softeners Aren’t As Bad For Septic Systems as You Thought

In a Nutshell: An extensive (and expensive) WQA-funded research project indicates that well-tuned, efficient modern water softeners seem to be good for home septic systems, but older, less-efficient softeners degrade the performance of  home septic tanks.

The following is excerpted from a Press Release issued during the Water Quality Association’s annual convention in April, 2013. In the Gazette’s opinion, the reported research is at best another way of saying, “Water softeners aren’t as bad as you thought they are.”

INDIANAPOLIS, April 2, 2013 /PRNewswire/ — Water softeners set with appropriate salt efficiency do not harm septic systems and may actually help them, according to a new study released today at WQA Aquatech USA.

The Water Quality Research Foundation commissioned Virginia Polytechnic Institute and State University to conduct independent and scientific testing on the issue in 2012.  The result is an official report, “Changes in Septic Tank Effluent Due to Water Softener Use.”  Nearly $100,000 was invested for this 18-month study, which included many site visits and the work of numerous trained experts from WQA, NOWRA, regulators and NSF International.

According to the authors of the study: “The data indicate that the use of efficiently operated water softeners improves septic tank performance, while the use of very inefficient home softeners may have a negative effect on solids discharge to the drain field and the level of impact will depend on the level of hardness in the water, whether the regeneration waste is discharged to the septic tank, and the amount of excess sodium present in regeneration wastes.” 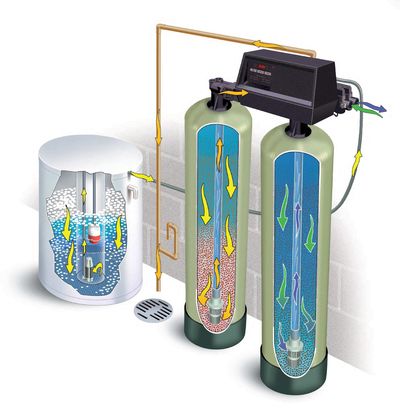 Meter-controlled softeners can be set up very efficiently. Twin metered softeners, like the one pictured above, are the most efficient of all.

Softeners are often the enabling technology that keeps the rest of our houses running effectively by preventing damaging scale build up, said Dave Haataja , executive director of WQA.  In areas with especially hard water, softeners are a necessity for anyone who doesn’t want to constantly buy new appliances and replace pipes and fixtures.  Comprehensive independent studies have also shown many other practical advantages: Saving energy and money, reducing the use of harmful detergents, and keeping our landfills a little less full.

To obtain the most accurate results possible, two different approaches were taken by those conducting the research.  One study in a controlled laboratory setting examined a range of softener/septic reactions.  Then to look at real-world conditions in everyday circumstances, case studies were conducted in the field.  The authors also looked at previous studies and tests.

WQA and NOWRA have collaborated to update the “Guidance for the Use of Water Softening and Onsite Wastewater Treatment Equipment” to include recommendations for use of water softeners with higher salt efficiencies, which this study indicates will minimize potential impacts on septic tank performance.

The Water Quality Association, a non-profit organization that seeks to uphold high standards in the water treatment industry, has committed to education programs to help disseminate sound practices for those with softeners and septics.  The association provides information through its professional training and certification programs and other venues.