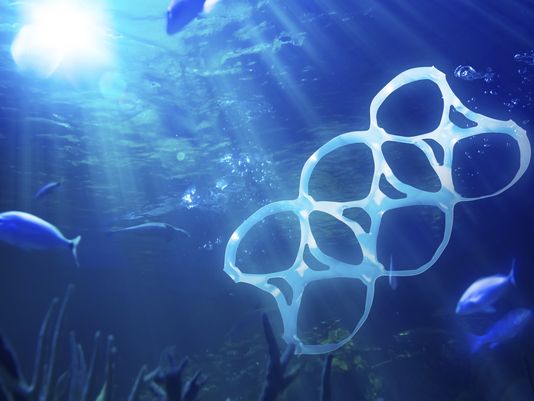 A new study estimates nearly 270,000 tons of plastic is floating in the world’s oceans. That’s enough to fill more than 38,500 garbage trucks.

The plastic is broken up into more than 5 trillion pieces, said the study published Wednesday in the scientific journal PLOS ONE.

The paper is the latest in a nascent field where scientists are trying to better understand how much of the synthetic material is entering the oceans and how it’s affecting fish, seabirds and the larger marine ecosystem.

The study’s lead author is Markus Eriksen of the 5 Gyres Institute, an organization that aims to reduce plastic in the oceans.

To gather data, researchers dragged a fine mesh net at the sea surface to gather small pieces. Observers on boats counted larger items. They used computer models to calculate estimates for tracts of ocean not surveyed.

The study only measured plastic floating at the surface. Plastic on the ocean floor wasn’t included.

Bits greater than about 8 inches accounted for three-quarters of the plastic that the research estimated is in the ocean.

Kara Lavender Law of the Sea Education Association in Woods Hole, Massachusetts, who wasn’t involved in the study, said the researchers gathered data in areas where scientists currently don’t have measurements for floating plastic debris, including the Indian Ocean, the Southern Ocean near Antarctica and the South Atlantic.

In addition, the study’s estimate for tiny plastic bits less than one-fifth of an inch — about 35,540 tons — is comparable to an earlier study by researchers in Spain who used different methodology, Law said. That study estimated there was 7,000 to 35,000 tons of plastics this size floating in the ocean.

It’s encouraging that two different approaches came up with such similar answers, given how difficult it is to measure plastic in the ocean, she said.

Studying the amount of plastic in the ocean will help scientists understand how the material will affect the environment and potentially the food chain.

For example, Law said, we might eat tuna that has ingested another fish that has eaten plastic that has in turn eaten another fish with plastic. These plastics could potentially have toxic chemicals.

“Am I being poisoned by eating the fish on my plate?” she asked. “We have very little knowledge of the chain of events that could lead to that. But it’s a plausible scenario that plastic ingested at lower levels of the food web could have consequences at higher levels of the food chain.”