Sunday 8 June is World Oceans Day, an event to raise global awareness about threats to the oceans and promote marine conservation. The special day has been recognised by the United Nations since 2008.

According to World Wide Fund for Nature (WWF), more than 80% of marine pollution is caused by land-based activities that cause oil spills, fertilisers and toxic chemical runoff and the discharge of untreated sewage.

Some water pollution starts also as air pollution, which settles into waterways and oceans, according to the United States’ National Ocean Service. 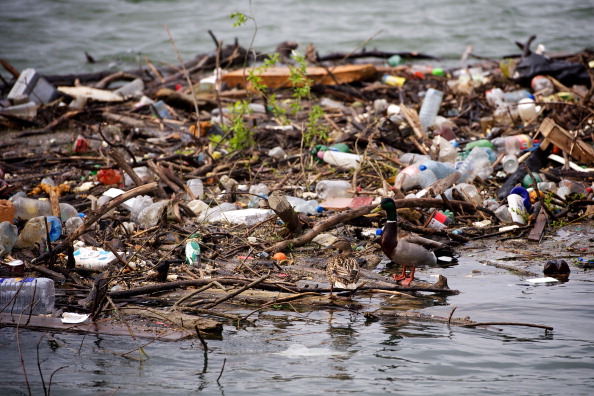 More than 80% of marine pollution is caused by land-based activities.

IBTimes UK looks at the most polluted oceans areas and seas in the world.

The dead zone here is one of the largest in the world.

Its waters are full of nitrogen and phosphorous that come from major farming states in the Mississippi River Valley, including Minnesota, Iowa, Illinois, Wisconsin, Missouri, Tennessee, Arkansas, Mississippi, and Louisiana.

The presence of these chemicals frequently turns Gulf of Mexico waters hypoxic, or low in oxygen.

Atlantic Ocean – North Atlantic Garbage Patch
This patch was first documented in 1972 and is entirely composed of man-made marine debris floating in the North Atlantic Gyre.

Scientists estimate that the North Atlantic Garbage Patch is hundreds of kilometres in size and has a density of 200,000 pieces of trash per square kilometre in some places.

Pacific Ocean – Great Pacific Garbage Patch
Located in the northern Pacific Ocean, near the North Pacific Gyre, this collection of marine debris is largely composed of plastic and chemical sludge.

This patch is believed to have formed gradually as marine pollution was brought together by ocean currents.

The exact size of the patch is unknown, but estimates range from 700,000 sq km (270,000 sq miles) to more than 15 million sq km  (5.8 million sq miles). Because the floating debris is largely composed of microscopic pieces of plastic, it is invisible from space.

The Great Pacific Garbage Patch collects marine debris from North America and Asia, as well as ships travelling through the area.

Rubbish from the coast of North America takes about six years to reach the Great Pacific Garbage Patch, while detritus from Japan and other Asian countries takes about a year.

Indian Ocean
A garbage patch in the Indian Ocean was discovered in 2010. This patch, mainly formed by plastic debris and chemical sludge, is the third major collection of plastic garbage in the world’s oceans.

According to scientists, tropical cyclones that cause large numbers of deaths around the Arabian Sea (region in the northern Indian Ocean) are becoming increasingly common as a result of pollution.

Because it is so enclosed by land, the warm waters of the Mediterranean take more than 100 years to clean and renew themselves, according to Greenpeace.

Due to the high rates of pollution, many marine species are at risk of extinction, among them the Mediterranean Monk Seal, one of the world’s most endangered marine mammals.

Half of the fish species in the Baltic are at levels below the critical biological level.

As it only has a narrow outlet to the ocean – between Sweden and Denmark – its water takes 25-30 years to refresh itself.

The health authorities of Finland have warned against eating some species, such as Baltic herring, from the Baltic Sea.

Caribbean Sea
Located in the northern part of the Atlantic Ocean, the Caribbean Sea is one of the areas most seriously damaged by human activity.

According to a study by the National Centre for Ecological Analysis and Synthesis (NCEAS), oil spills, over-fishing, pollution and climate change are killing marine life. Oyster and sea grass beds, mangroves, fisheries and coral are slowly disappearing.