Why God Created the Deep, Deep Ocean, and Where Is Adolf Hitler Today?

Excerpted from The City of God by E. L Doctorow

Have you ever wondered why Nature  created  the “lightless, airless ocean bottom” with its tons of pressure per square inch, its outrageously ugly creatures, its “living tube worms and anglerfish, sea spiders, whipnoses” . . . hanging around in the soundless deep blackness, “their mouths agape and tentacles upheld to catch the flocculent dead matter drifting like snow from the blue and green ocean above?”  Well, according to one of the characters of novelist E. L. Doctorow, it’s all part of a Plan.–Hardly Waite. 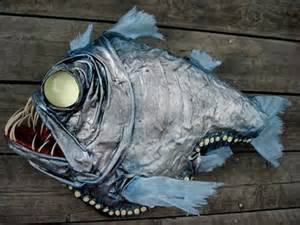 This is all part of the Universal Plan.

We are instructed that life does not require air or warmth. We are instructed that whatever condition God provides, some sort of creature will invent itself to live in it. There is no fixed morphology for living things. No necessary condition for life. Thousands of unknown plant and animal beings are living in the deepest canyons of the black, cold water and they have their own movies. Their biomass is far in excess of our own sunlit and air-breathing plant and animal life. At the very bottom of the sea are smoking vents of hydrogen sulfide gases in which bacteria are pleased to flourish. And feeding upon these are warty bivalves and viscous, gummy jellies and spiny eels with the amazing ability to fluoresce when they are attacked or need to illuminate their prey. God has a reason for all this. There is one fish, the hatchet, which skulks about in the deep darkness with protuberant eyes on the top of its homed head and the ability to electrically light its anus to blind predators sneaking up behind it. The electric anus, however, is not an innate feature. It comes from a colony of luminescent bacteria that house themselves symbiotically in the fish’s asshole. And there is a Purpose in this as well which we haven’t yet ascertained. But if you believe God’s divine judgment and you countenance reincarnation, then it may be reasonably assumed that a certain bacterium living in the anus of a particularly ancient hatchetfish at the bottom of the ocean is the recycled and fully sentient soul of Adolf Hitler glimmering miserably through the cloacal muck in which he is periodically bathed and nourished. 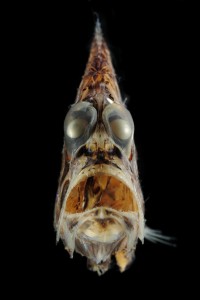 Hatchetfish, Front View. Adolph Hitler Is Visible only from the Other End.