What’s in Your Lakewater

That is, the water we’re coating ourself in every time we head to a Northern Michigan beach is pure and clean as the driven snow — the driven, non-polluted, bacteria-free snow.

But the truth is we share our water with other mammals and organisms that don’t share our propensity to flush away their waste in a convenient rest room — including other humans who tend to shun toilets or diaper duties.

We also live in a world that has impervious surfaces — concrete parking lots, sidewalks and roads — over which rainwater must run and that rainwater must go somewhere. Often, that’s into other, natural bodies of water such as rivers and lakes.

Luckily, there is enough clean water to wash away and dilute the digested stomach contents of those who walk, crawl or flap the earth. Most of the time.

“Anything from cigarette butts to raccoon poop to bird poop,” said Kevin Cronk, monitoring and research coordinator with Tip of the Mitt Watershed Council in Petoskey. “Anything that’s washing off the ground and agricultural fields.”

Northern Michigan beaches are closed when E. coli bacteria count exceeds 300 organisms per 100 milliliters, or about a third of a cup, of water, said Scott Kendzierski, director of environmental health services for the health department.

The department tests more than 50 beaches, both inland and Great Lakes, in Antrim, Charlevoix, Emmet and Otsego counties. By the end of the typical 10-week period, the department will have collected about 1,800 samples. At about $18 a pop, testing each of those samples — including a few that come from counties in the Upper Peninsula — could cost the department as much as $28,800. 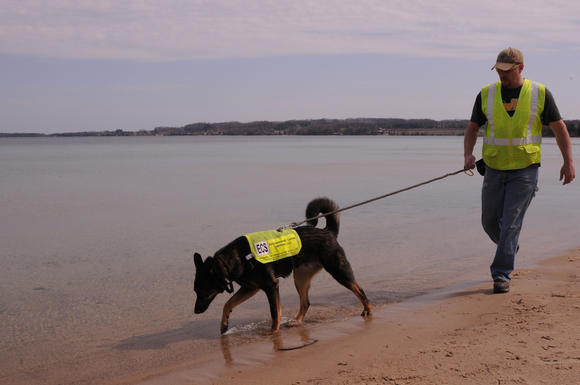 Dog’s can not only detect excrement, they can distinguish been human excrement and that of other creatures.

“Because we have a lot more beaches than (the 50 monitored), we select the beaches based on risk and risk factor,” said Kendzierski. “A large one is population. If the beach was widely used, we would select that one over a beach perhaps we never saw bathers at.”

In 2011 and 2012, the beach monitoring program — which is funded by the Clean Water Michigan Initiative and the Environmental Protection Agency Great Lakes Beach Act fund — saw an influx of money from the Great Lakes Restoration Initiative.

Funds from the initiative allowed the health department to test more beaches over a longer period of time — 16 weeks — and collect data such as wind direction, wind speed, temperature and rain events. The data told the story of a beach: if a beach was situated north-south, and the wind is predominately from the west, water would constantly be blown against the beach.

By contrast, if a beach is oriented east-west with a westward wind, water would continually be flushed away from that beach. Having that data would allow the department to predict how safe beaches may be under certain conditions and cut down on the amount of costly sampling the health department might have to do.

But this year, because of sequestration cuts, the health department lost the funding allowing them to test extra beaches, though workers still record wind speed, direction and other pieces of data.

Contamination from storm water leads many cities to establish “best management practices” for storm water. What runs off city streets during a rain event can end up in water.

A few storm drains run nearly straight into Little Traverse Bay in Petoskey, including the waterfall at Bayfront Park. The waterfall is a stream that forms out of the Winter Sports Park, but picks up drainage from urban areas before reaching the bay front, said Cronk. He calls it “storm water falls.” Other storm water mains drain into the Bear River out of what Cronk calls “out falls” and then into the bay.

A typical ride for rainwater looks like this: the water drains off streets into storm water drains, then into catchments. There, the water slows and solids, such as those cigarette butts, can settle out. There are some controls in place, said Cronk, for sediment pick-up.

“But beyond that, it flows through the system,” said Cronk. “There isn’t something that will filter out any kind of pollutants.”

That means rain can pick up other material such as oil and gas from cars, heavy metals, pesticides and fertilizers.

“The key thing is, everything goes in it,” said Cronk. “If you spit on the sidewalk, if you dump coffee on pavement, whatever, all the bird poop on the roofs, all the stuff ends up untreated and into the river, then into the bay.”

A downstate couple, in 2007, was given the idea to create a much cheaper way to test for E. coli — specifically, E. coli that comes from human sewage.

Scott and Karen Reynolds established Environmental Canine Service in Vermontville in 2009. The two have more than 30 years of combined experience in canine scent training, said Scott Reynolds. His supervisor asked him about using dogs to scent human sewage.

“He asked me if I could train a dog to smell poop,” said Reynolds, laughing.

Dogs have an extraordinarily good sense of smell, but what makes that particularly special is that they can filter out background scents and focus in on one smell. In this case, human sewage, over cow or horse material.

“Humans can’t do that, and that’s what makes dogs so superior,” said Reynolds.

The Reynolds’ dogs — the couple has two in Michigan certified for sniffing human sewage and three more in training, as well as five dogs and four handlers in northern California — sniff out sites such as the outfalls that flow into the Bear River to see if any include human sewage. If the dogs get a positive hit, they sniff other places along the sewer line to see where a line might be broken, or where there are cross-connected pipes that might accidentally be putting human sewage into surface waters.

Reynolds says the dogs don’t replace E. coli testing. Rather, they sniff out these places of contamination, so a city might only test a few spots rather than a few hundred.

“Instead of (the source) being a potential of 200 houses on this street, now we know it’s maybe these four,” said Reynolds.

“It would help us. Hopefully, we would find nothing. It would all be blank samples,” said Cronk.

Even so, Cronk doesn’t get too ruffled about the water quality around Petoskey.

“On the positive side, the metals, the oils, the grease — those numbers are very low, oftentimes not detectable,” said Cronk.

Cronk isn’t even squeamish about drinking the water.