Editor’s Note: Brian Campbell is the founder of WaterFilterGuru.com.  The article below is a good introductory overview of what water treatment professionals mean when they talk about “turbidity.”

If you’re researching the common drinking water contaminants, you may have heard of turbidity. Turbidity isn’t actually a contaminant itself, which can make it difficult to understand exactly what you’re dealing with.

This short guide will equip you with the information you need to know about turbidity in drinking water: what it is, how it’s measured, and its effects.

What is Turbidity of Water?

The turbidity of water is a measurement of how clear or cloudy it is. The cloudier the water, the higher its turbidity.

To get a little more scientific, turbidity measures a liquid’s “relative clarity” – or the amount of light that refracts off materials in a liquid sample. The more light is refracted within a sample of water, the higher the level of turbidity.

There are a number of materials that can cause turbidity, including silt, inorganic and organic matter, clay, algae, and some microscopic organisms. 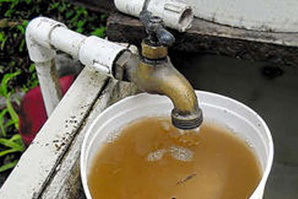 How is Turbidity Measured?

You can measure turbidity using a turbidity meter or sensor, which will use scatter-detection methods to quickly detect the levels of total suspended solids (TSS) in water. TSS – referring to waterborne particles that are larger than 2 microns – are the common culprits behind turbidity.

Editor’s Note:  To clarify, here’s an explanation  by the same author to help distinguish between Total Suspended Solids and Turbidity:

Turbidity and suspended solids are often used interchangeably, which can make it difficult to understand the difference between the two. However, they are not quite the same thing. Turbidity refers to water’s transparency and the more suspended solids water contains, the less transparent it will be. In short, turbidity is a measurement of how well light can pass through water, while TSS is a quantitative measurement of suspended particles in water.

What Are the Most Common Causes of High Turbidity?

The most common causes of high turbidity are phytoplankton, erosion, urban runoff, wastewater discharge, algae and sediment disruption. More detail on each of these causes is listed below.

Phytoplankton are a type of marine algae, which are microscopic in size but are capable of turning water brownish-red when present in high concentrations. These organisms often float or “drift” in water, and can survive in both fresh and saltwater environments.

Water affected by erosion can also have high levels of turbidity. Imagine a river flowing through an area of loose dirt. When this dirt is worn away, it can seep into water. The consistent force of a flowing river can also erode tougher materials, like rock. This can increase the sediment level in water, often resulting in cloudiness.

Urban runoff is rainwater (or melted snow) runoff in urban areas, which can be responsible for pollution or contamination of water sources like private wells, lakes, and rivers.

When water runs through agricultural or industrial sites, building surface materials, and even some impermeable paved surfaces, it may collect sediment that increases the turbidity of whichever water source it ends up in.

When wastewater discharge isn’t treated properly, it may carry pathogens, suspended solids, and other contaminants into a body of water, increasing its turbidity. This water usually comes from pipes from factories and plants that treat wastewater.

While the EPA has produced guidelines on how to treat wastewater before discharging it, many water sources are not correctly treated before being discharged.

Algae are a group of organisms that live in saltwater and freshwater bodies. You can find algae in a variety of sizes and appearances, and sometimes these organisms are too small to be seen by the human eye.

Algae take nutrients from the water, improving oxygen levels. But when algae die, organic matter is released into the water, increasing turbidity. Some algae are rooted to the surface of the ground, while others float on the surface of water.

Similar to erosion, sediment disruption occurs when water picks up a body of sediment and carries it to a new location, increasing the turbidity of specific areas, such as the pool of water beneath a waterfall. In rivers, this sediment disruption can affect water flow and alter the depth of the water.

What Are the Effects of High Turbidity?

The biggest problem with high turbidity is that it affects the aesthetic quality of a water source. Not only can this negatively impact tourism and recreation, but it can also affect marine or aquatic life by reducing oxygen and food supplies.

From a water treatment perspective, it is more expensive to treat water with high turbidity as it must be more thoroughly filtered to remove sediment of all different sizes.

Drinking water that has high turbidity levels may be dangerous, depending on the cause of the water’s turbidity. For instance, water that contains certain suspended solids like algae and bacteria may make you sick to drink. Other common causes of turbidity, like sand and dirt, might not make you sick, but this sediment could have an effect on the infrastructure of your home’s pipes, plumbing and water-based appliances.

Turbidity and total suspended solids are linked – but they’re not the same thing. As we know, turbidity is a measurement of how transparent water is. Suspended solids, on the other hand, are the contaminants that are largely responsible for turbidity in water.