What Happens to Abandoned Mines?

The problem with America’s abandoned mines 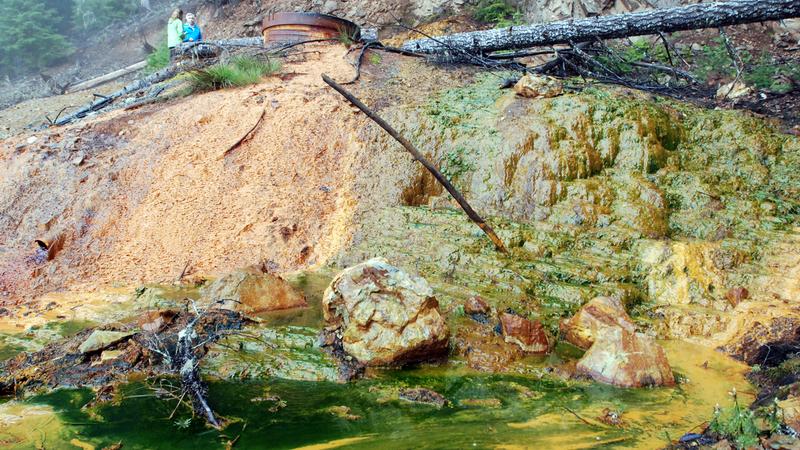 Taxpayer-funded efforts to clean up Oregon’s abandoned Formosa Mine, a federal Superfund site, could cost more than $20 million.

A mine plans its death before its birth. The leftover waste from mines is so hazardous that mining companies must figure out what to do with it decades in advance, even before they start digging.

That’s how it works today, at least. But in 1981, when the United States government began requiring mines to have rehabilitation plans, many operators simply up and left instead. The government has identified about 46,000 abandoned mines on public lands alone. Some of them are top-priority Superfund sites.

But most haven’t even been mapped. By some estimates, there are as many as half a million abandoned mines in the U.S. These sites have the potential to contaminate water, pollute soil, kill wildlife and sicken humans, to say nothing of the risks of falling down a hidden mine shaft. (This is a legitimate concern in some areas – in California, the state employs teams that scour the state looking for abandoned mines and plugging them up. There was even a “Dirty Jobs” episode about these folks.)

Last month, heavy rains from Hurricane Odile caused two abandoned mines in Arizona to leak orange and brown sludge, threatening a waterway that runs into Patagonia Lake State Park. With thousands of abandoned mines dotting the American landscape, particularly in the West and Southwest, just how worried should we be?

The problem with tailings

Minerals have to be separated from the rocks once they’re taken out of the ground. That process of separation creates a waste called tailings, a combination of ground-up rock, chemicals and heavy metals. This waste is often stored as a liquid in a pond, though sometimes it is dried and kept in a special building.

Today, a mine’s storage facilities for tailings are one of the most scrutinized parts of its construction plan. If a wall breaks, massive amounts of toxins would be released into the water and soil, causing what is considered an environmental catastrophe. This summer, a tailings pond spill at a mine in British Columbia was compared to an“avalanche” of toxic waste.

Acid: Sulfides in the tailings turn into acid that drains into surface water, along with chemicals used during processing, like cyanide. Acid drainage makes the water more corrosive. Marine habitats become unable to support fish and plant life.

Heavy metals: As the newly created acid leaches, it allows heavy metals to escape. Arsenic, mercury, cadmium, lead and other metals wash into the soil and water supply. People in turn eat fish and drink water contaminated with heavy metals.

Paying for the cleanup

Basically, the public foots the bill.

Funding can come from the Environmental Protection Agency’s Superfund program, Clean Water Act grants, watershed programs run by the U.S. Forest Service and Bureau of Land Management, state sources and others. No single agency is in charge.

To clean up the estimated 500,000 abandoned mines, taxpayers face a price tag of $32 billion to $72 billion, the Department of the Interior predicted. And that’s just for “hardrock” mines, which require mining that involves separating metals and minerals from ore.

The Superfund program, for example, puts a handful of former mine operators on the hook for part of the costs. To clean up just the 63 top-priority mine sites, the bill could top $7.8 billion. The public would pay about $2.4 billion of that, according to the Government Accountability Office.

Coal mines are treated separately. Current coal mine operators pay into the Abandoned Mine Land Reclamation Program, which then distributes money to states to clean up and rehabilitate abandoned coal mines. So far, it has spent about $7.6 billion.

Uranium mines, too, are treated separately – a select few get Superfund money, but most are handled by the Department of Energy. In 1998, it estimated a cost of about $2.3 billion to clean up tailings sites, an amount that didn’t include the additional costs of cleaning nearby water.

There isn’t a comprehensive list or map of identified abandoned mine sites – there are just too many federal agencies involved. Which agency is in charge depends on the type of mine, its location and the level and type of pollution.

The Bureau of Land Management, for example, takes the lead on abandoned hardrock mines on public lands. Most are in Western states, concentrated in Nevada, Colorado and Arizona. Abandoned uranium mines, on the other hand, are most often on tribal lands, especially in the “Four Corners” of Colorado, New Mexico, Arizona and Utah.

Even so, cleaning up toxins isn’t the end for abandoned mines. The ultimate goal is to reclaim the land, allowing natural ecosystems to re-establish themselves and erase evidence of the mine almost entirely.

Source: The Center for Investigative Reporting.