And before you say, isn’t all water on Earth billions of years old, the case of the ancient Canadian water is different. This water has been isolated for all that time, never evaporating, never raining down from the skies, with no contact with the outside world, for a billion years, maybe more. —Reader comment.

Water has been found in bore holes in a copper/zinc mine almost two miles beneath the surface of Ontario that has been shown by tests to be at least 1.5 billion years old–probably older. 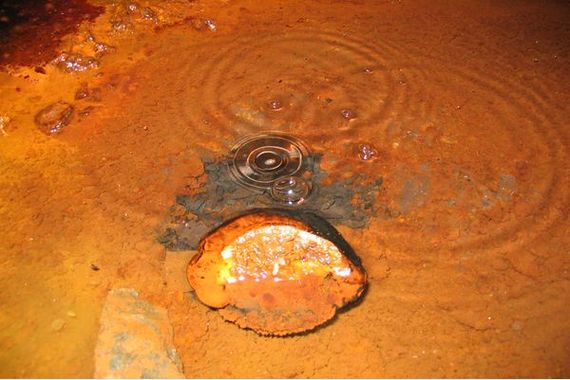 Ancient water from a Canadian mine.

In the past tiny amounts of ancient water have been discovered, hardly enough to study, but the water from the Canadian  mine pours out at a couple of quarts per minute. The water is of interest to scientists mainly because it provides clues to the planet’s history and allows speculation about life on other seemingly inhospitable environments, like Mars.

Studying the water may yield new information about the Earth in its earlier stages, including, perhaps, billion-year-old forms of life.

The water itself, after eons of contact with minerals,  is saltier than sea water.  A basic rule of thumb is the older the water the higher the mineral content. One scientist who took a tastes said: “It tastes terrible. What jumps out at you first is the saltiness. … It has the consistency of a very light maple syrup. It doesn’t have color when it comes out, but as soon as it comes into contact with oxygen, it turns an orangy color because the minerals in it begin to form.”

Anyone who has been swimming in Utah’s Great Salt Lake will understand the viscosity comparison.