Gaza Is Running Out of Water

There is so much bad news coming out of Gaza that no one seems to notice that there is a a severe water crisis.

According to the authorities in Gaza, about 95 percent of the municipal water is undrinkable by international standards, and in any case, some 60 percent of homes don’t have access to potable water on a regular basis.

Private water tankers make the rounds of Gaza City neighborhoods, and residents buy what they need to drink, cook and clean. It is a health disaster. 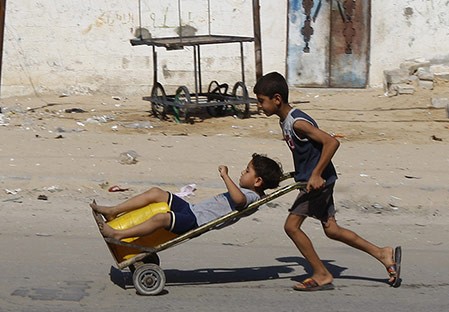 Palestinian boys making a water run from a UN relief facility in Gaza.

The relentless economic blockade being carried out by Israel has virtually choked off infrastructure maintenance.  Electricity, for example, is in short supply.

Because of electrical shortage, sewage systems, desalination plants and water pumping stations are barely working and there seems to be no hope for improvement.

What is worse is that Gaza’s limited water reserves are being depleted more rapidly than expected.  One water authority official says, “Gaza is facing a real environmental and health disaster in the coming years, meaning by 2016 — not even 2020 — our aquifer will be no more capable of giving us water, even saline. Then what? Gaza will not be livable.”

Since Gaza’s once healthy aquifer is being depleted faster than it can be replenished, sea water intrusion is causing saline and nitrate contamination that make the water unsafe to drink. 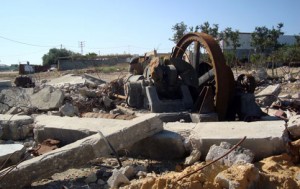 One of many Gaza water wells destroyed by Israeli military.