How to Keep Your Well Healthy

Gazette Introductory Note:  This excellent overview of water well health is reprinted as a service to our readers.  The author points out basics that every well owner should be aware of.  Well owners have a responsibilty to themselves and to others.  When you punch a hole down to the water table, you open an avenue for contaminants to enter the ground water.  –-Hardly Waite, Gazette Senior Editor.

“Wellhead protection, whether a dug well or artesian, is a top priority in having a healthy well,” said Bart Cushing, owner of Cushing & Sons Dependable Water Wells in Keene, New Hampshire. “Wellhead protection will also solve about eighty percent of any problems you might run into as well,” he added. In the past few decades, wells have gone from being dug two to three feet wide to the more modern six-inch inch width and are primarily artesian and capped with cement.

Your first consideration when contemplating a well on your property is finding a well drilling business that has experience and references. Cushing said that people sometimes think they are saving money by hiring a contractor who is inexpensive and uses cheap, possibly hazardous materials. “I’ve had a lot of business during the recession fixing a lot of these mistakes,” said Cushing. 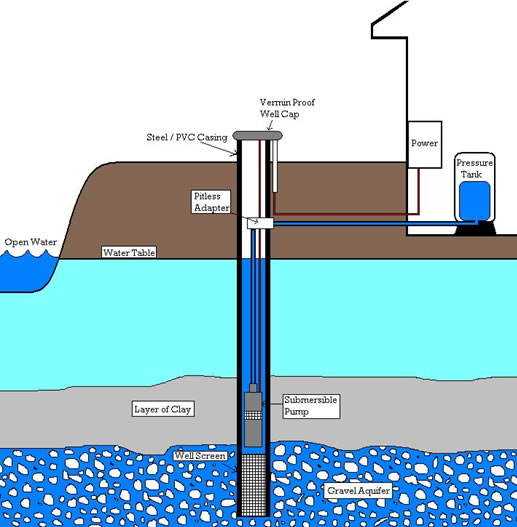 Once you’ve hired a reputable company you will need to consider:

*Where is the ground water?

*Is the proposed well away from sources of contamination?

*Is the location convenient to power and the building being supplied with water?

*Is the location assessable for drilling and pump installation?

Protecting your well from contaminants

Cushing advised having your well tested at least once a year, suggesting the late spring as the best time to test as that is when there is the most run-off from melting snow.

Cushing said he has been very surprised over the years regarding some of the things people don’t understand about keeping the water in their well healthy. “For example, if gasoline is spilled within one hundred feet of a well and there is enough of a gradient, sure enough, there will be petro chemicals in your well,” said Cushing. Though he added the chemicals could take two to three days to seep into the well.

Cushing noted a few other ill-advised homeowner choices, such as placing a kennel or livestock near your well. “For example, if you have ducks, you are likely to have them by a source of water, which will also likely be close to where you might place a well,” said Cushing. The great danger from having pets and livestock in range of your well is the threat of E. coli. It is also important to take into consideration use of pesticides on your property as well as salt run-off from near-by roadways. “You can filter almost anything,” Cushing said.

“Normal” contaminants in your well

Water in your well can be treated for having high levels of iron or being other high mineral contents that occur naturally depending on where your well has been dug.

Cushing said that in recent years there has been a greater concern regarding radon in water supplies. He said allowable amounts in water vary greatly from state to state, but that radon in your water supply is rarely, if ever a real concern. Cushing said in most cases you’d “have to take a twelve-hour shower for the next ten years to be affected by the amount of radon in your water.”

“Testing (water) has become far more sophisticated over the years,” said Cushing. Arsenic is another naturally occurring substance that is likely to show up during a test, but is rarely in appreciable quantities. Cushing said that arsenic is more likely to show up when you live near a railroad track. “They often treat the rails with arsenic to kill rats,” Cushing said.

If you have concerns regarding contaminants, it is a good idea to have your well tested more frequently.