With the growing popularity of alternatives to conventional water softeners, most notably Template Assisted Crystallization (TAC) systems, residential customers are finding it more difficult to choose a home treatment system for hardness.

Below here are some issues that come up and our comments on them, based both on our direct experience with the products themselves and on discussions we’ve had with customers who use them, In each case, we’re comparing a standard TAC unit to a standard conventional water softener.

Adds salt to water:  The softener works by exchanging salt for calcium and magnesium, so, yes, it adds salt.  TAC does not use salt.

Removes hardness.  Calcium and magnesium are the minerals that cause water to be hard. A softener removes them.  TAC “conditions” them so that they are less offensive; it does not remove hardness, so it really should not be called a softener. There is currently no  simple way (like a hardness test) to quantify the effect that TAC units have on hardness.

Gives the water a feeling of slickness.  Softener, yes; TAC, no. The slick feel, of course, is a positive effect for some users, a negative to others.  And, unfortunately there is currently no test for “slickness.”

Makes plumbing and appliances last longer.  Yes in both cases.

Initial cost comparison. Softeners vary in price, a lot, depending on style and manufacturer.  In general, TAC units cost more than good quality softeners but less than high-end softeners.

Upkeep. Operating Cost.  If the user’s labor is considered, or if the user pays someone to keep the softener cleaned and full of salt, the softener costs more. The single “upkeep” cost for TAC units is media replacement, which is expensive, but it only happens about every third year.  TAC uses no salt, no water for regeneration, no electricity, and has no moving parts that break. TAC units are so simple that most users can do the occasional media replacement themselves.

Environmental impact.  TAC uses no water for regeneration and adds nothing to the waste stream. Softeners use considerable amounts of water for regeneration and add salt to the city’s waste stream or the septic tank. Why is this a big deal? Because city water departments are hard-pressed to dispose of the waste water, which usually can’t be used for irrigation because of the salt content. Softeners, by the way, can be regenerated with potassium chloride rather than sodium chloride, which is regarded as more environmentally friendly but which is considerably more expensive than plain old softener salt.

Health issues.  Although we believe that the amount of salt added to drinking water by a softener probably has no negative health impact unless you drink outrageous amounts of it, not everyone would agree. The salt can be removed from softened water by an undersink reverse osmosis unit. RO removes salt handily.  TAC adds nothing objectionable to drinking water–at least nothing we know about yet. Softeners add salt and remove calcium and magnesium; TAC units neither add nor remove minerals.

Installation.  The TAC unit is easier to install. The softener needs electricity and a drain connection.  TAC needs neither. The softener has a control valve to program and a startup procedure to follow; TAC units require no programming or setup.

Pre-treatment — A sediment filter is essential in front of the TAC unit and is usually a good idea in front of a softener. In general, softeners are tougher and require less protection. Softeners actually remove small amounts of iron and manganese, but TAC units must be protected  from them by pre-treatment. Likewise, TAC units are very sensitive to copper and have to be protected from new copper piping by remaining in by-pass mode until new copper piping is seasoned. Both softeners and TAC units last longer with pre-treatment for chlorine or chloramine  in city water, but this is not essential. 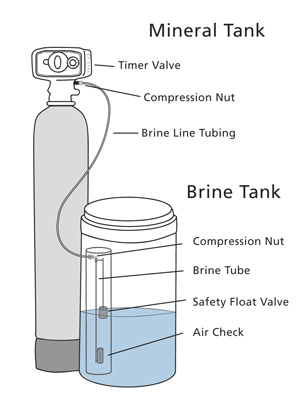 The conventional softener in the picture consists of the tall resin tank, the control valve on top, and the brine tank where salt to regenerate the resin is stored.  TAC units have only the tall tank and the top valve does not require electricity. No brine tank is needed.