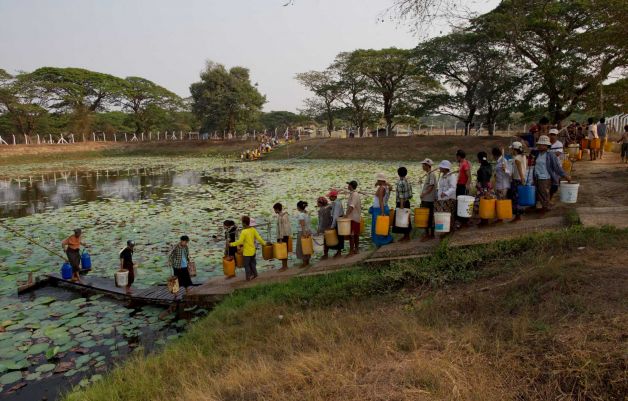 DALA, Myanmar (AP) — Every afternoon, the long lines start to form, hundreds of men, women and children waiting to dip their plastic buckets into the lotus-filled reservoir just outside Myanmar’s biggest city, Yangon. It’s their only source of clean drinking water, they say, and during the dry season, April and May, there is only so much to go around.

“It wasn’t always this way,” says 72-year-old Tin Shwe, one of the village elders, as he looks at the queue, some boys as young as 8 waiting their turn, yokes at their side. “It used to be only paddy fields. Only a few houses. There was enough water for all of us.”

Myanmar only recently emerged from a half-century of military rule. Nascent democratic reforms implemented by the new civilian government since 2011 have resulted in a development boom, with the World Bank and others pouring billions of dollars into the country of 60 million as it starts to open up to the world. But so far, it is the big cities that are seeing the benefits.

Even places like Dala township — just a 20-minute boat ride from Yangon — have so far been left out. Authorities tell residents that maybe next year the government will start installing pipes so that water can be delivered straight to their homes.

The water shortages began with a population boom in the 1980s, with the number of inhabitants jumping from a few dozen to more than a thousand in part because they wanted to be close to the big city.

With no restrictions on how much water each family could take, the natural, fresh-water pond started running low. Eventually, just a decade ago, it dried up entirely. With no offers of help from the government, men like Tin Shwe decided to step in, devising a rationing system as water started seeping back so that residents could rely on it year-round.

Villagers have only one hour — between 4 p.m. to 5 p.m. — to get their water during dry season to limit its use. They are charged a tiny sum — 10 kyat for each bucket, or 10 U.S. cents. With so many takers it’s enough money for small upkeeps, like fixing the fence that surrounds the reservoir or stringing up electricity for lights.

People walk for up to five kilometers (three miles) with their empty buckets. They are allowed to fill up two each. If they need more, they can get back in line. When they are ready they begin the long, hard trek home. 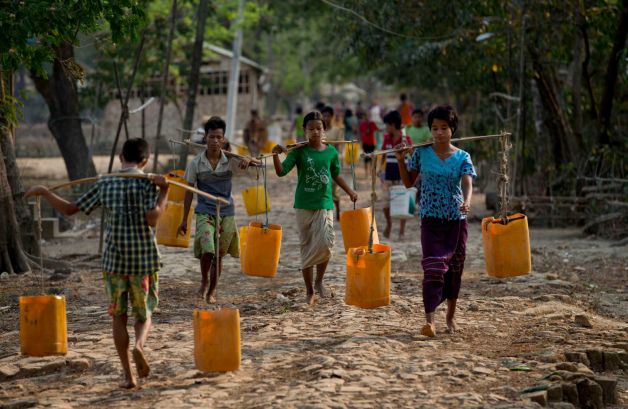 “I usually get three buckets,” said 19-year-old Aye Thu Zar as she neared the front of the line. “There are seven in my family, so that’s enough for drinking and cooking. But the walk home hurts my shoulders. My legs, too. I can barely sleep at night the pain is so bad.”

She and others hope the new Myanmar will eventually reach Dala.

But for now, says Ko Ko, one of the villagers waiting his turn, “we are like water shortage refugees.”