Water on Moon Came from Earth, According to a New Theory

Water on Earth and Moon originated from primitive meteorites

Gazette’s Introductory Note:  Theories (guesses) about the origin of water on the moon are no longer a dime a dozen; they’re more like 4 cents per dozen.  Here is another, this one from The Hindu Business Line.  The Gazette’s theory, by the way, is that the Moon Goddess Diana simply created  Moon water one  Monday afternoon when hunting was out of season because she was bored.--Hardly Waite.

Water on Earth and the Moon may have originated from the same source – primitive meteorites, scientists say.

Researchers used a multi-collector ion micro-probe to study hydrogen-deuterium ratios in lunar rock and on Earth.

Their conclusion: The Moon’s water did not come from comets but was already present on Earth 4.5 billion years ago, when a giant collision sent material from Earth to form the Moon.

Water inside the Moon’s mantle came from primitive meteorites, new research finds, the same source thought to have supplied most of the water on Earth. The findings raise new questions about the process that formed the Moon.

The Moon is thought to have formed from a disc of debris left when a giant object hit Earth 4.5 billion years ago, very early in Earth’s history.

But recently, NASA spacecraft and new research on samples from the Apollo missions have shown that the Moon actually has water, both on its surface and beneath.

By showing that water on the Moon and on Earth came from the same source, this new study offers yet more evidence that the Moon’s water has been there all along.

“The simplest explanation for what we found is that there was water on the proto-Earth at the time of the giant impact,” said Alberto Saal, associate professor of Geological Sciences at Brown University and the study’s lead author.

“Some of that water survived the impact, and that’s what we see in the Moon,” said Saal.

Saal and his colleagues looked at melt inclusions found in samples brought back from the Apollo missions.

Using a Cameca NanoSIMS 50L multi-collector ion micro-probe, researchers measured the amount of deuterium in the samples compared to the amount of regular hydrogen. 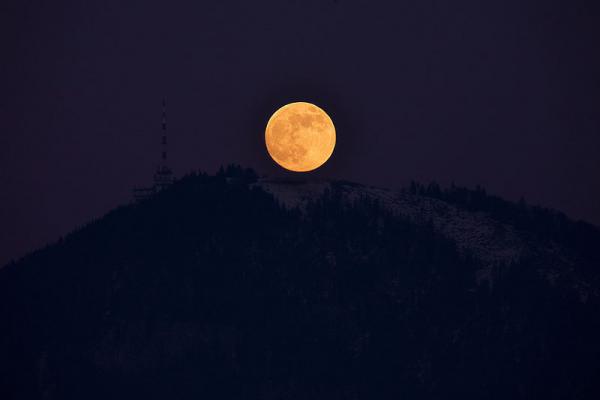 Water molecules originating from different places in the solar system have different amounts of deuterium.

Saal and his colleagues found that the deuterium/hydrogen ratio in the melt inclusions was relatively low and matched the ratio found in carbonaceous chondrites, meteorites originating in the asteroid belt near Jupiter and thought to be among the oldest objects in the solar system.

That means the source of the water on the Moon is primitive meteorites, not comets as some scientists thought.

“The measurements themselves were very difficult,” Erik Hauri of the Carnegie Institution of Washington said, “but the new data provide the best evidence yet that the carbon-bearing chondrites were a common source for the volatiles in the Earth and Moon, and perhaps the entire inner solar system.”