Water: It Isn’t Just How Much You Use, But What You Use It For

Introductory Note:  A friend once said that water isn’t really “wasted” unless it is sent off of the planet.  He meant that water is ultimately always recycled, so when we use it we’re just borrowing, not consuming.   That’s what the Pennsylvania official in the AP story below has in mind by suggesting that we should classify the ways water is used and charge for it accordingly.

Using water to water a lawn is one thing, but doing something with it that takes it out of circulation, out of 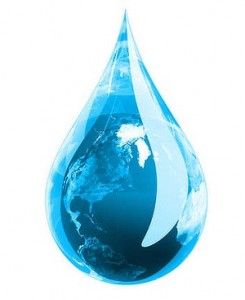 Nature’s recycling system, is something quite different.  There are, of course, many subtle distinctions be be considered here.  For example, the official would levy fees on companies that bottle water and take it out of the state, but one could argue that if a man in Virginia drinks the water and sends it through the wastewater  treatment system from which it arrives at a Virginia lake from which it is evaporated and formed into a cloud, it might well fall as rain on Scranton, PA.  It’s harder to make such a case for the oil company which injects water deep into the earth, but, time is long, and who knows whether in a few eons the water will make its way back to PA.–Hardly Waite, Pure Water Gazette.

PITTSBURGH – The head of the Pennsylvania Fish and Boat Commission says he’s considering seeking a new fee on water extracted by industry and permanently removed from the environment.

Commission executive director John Arway said that with a $9 million budget shortfall expected in 2017 at the agency, which is funded mostly by anglers and boaters, he’s “searching high and low” for alternative funding, according to The Pittsburgh Post-Gazette.

Officials say a fee on “consumptive use” of water, with revenues going to the commission and the state Department of Environmental Protection, may have legal precedent and tentative bipartisan support.

“When people drink water or take a shower, it’s returned through the sewage system,” Arway said. “When farmers irrigate fields it drains back into the ground. The Pennsylvania Constitution says we, the citizens, own the water. Some of these companies take it out of the environment, use it for free and it’s gone, never returned to Pennsylvania’s environment.”

The bottled water industry, for instance, pays nothing to remove the water that it treats, packages and mostly ships out of the state. The Marcellus Shale natural gas industry also extracts water for free, since the process of hydraulic fracturing pumps water so far below the water table it is rendered unusable. There are other industries that make similar permanent use of water, Arway said.

“That’s our water they’re taking for free,” Arway said. “They’re stealing the resource from us, and that makes me mad.”

While land ownership in the western United States usually includes water rights, rules dating back to English common law in the eastern states including Pennsylvania reserve most flowing water and its aquatic life in a trust owned by the citizens of the state. Arway cites a 1940s state law requiring dredging companies that remove sand and gravel from the Allegheny and Ohio riverbeds to compensate the state as a precedent for a new regulation that would compensate the state for permanent extraction of water.

A resolution introduced in the state Senate would allocate money to study the issue and recommend a fee structure for permanent use and degradation of water.

Chris Hogan of the International Bottled Water Association said that while the industry supports regulation of industrial use of water, the trade group oppose the kind of state fees Arway has proposed.

“The consumptive use of water for bottled water is arguably one of the highest and most appropriate consumptive uses of water in a product, since it quite literally is then directly consumed by consumers,” Hogan said. He said bottlers are already subject to permit and inspection fees and taxes, and since much of the product is returned to the environment the industry is actually a “net importer of water into states in the region.”

Steve Forde, a spokesman for the Marcellus Shale Coalition, said that in 2011 in Pennsylvania drilling operations used 8 million to 10 million gallons of water per day, among the least used by water consuming industries. Fracking operations accounted for 0.1 percent of 9.5 billion gallons of water extracted daily from the state, according to a 2011 U.S. Geological Survey report.

“There’s a good business case to be made for reducing water withdrawal. Transporting it to the well and then disposing of it , it’s expensive,” he said. “In our business, hydraulic fracturing is where water is utilized, and the truth is we’re not using as much water as we did just a few years ago.”

A spokeswoman for the Department of Environmental Protection department said the resolution is under review. Arway said the commission, which gets most of its money from license and permit fees and a federal excise tax on fishing and boating gear and fuel, will see a shortfall in four years due to employee pension obligations and growing infrastructure expenses, and water usage revenues would help make up the difference.