Gazette’s Introductory Note: We strongly support President Trump’s frequently stated plan to spend heavily on national infrastructure. Nothing could be more important, and such a project is long overdue. We’re way behind on fixing bridges, pipes,  and drainage networks. There are estimated to be over 55,000 US bridges that are badly in need of repair or replacement. We hope that these items can take precedence over walls and jails. The Scientific American article that follows suggests some directions that the president’s plan could take. 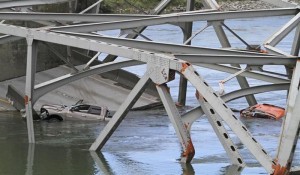 What implications will Trump administration policies have for America’s rivers?

When I was first asked this, I felt like a school kid caught daydreaming in class by the teacher. It was during the Q&A following a public talk I’d given at the Smithsonian a few months ago on the science of rivers, and I didn’t have a ready answer. I’m a science geek, not a policy wonk. The talk had been about things like why rivers run where they do, how the same river can experience drought one year and spill its banks the next, and how the amazing universality of mathematics leads to the same equations being used for operational flood forecasting and Wall Street derivative pricing models.

I also felt wary about speaking to political issues on behalf of all science, especially at a time when folks are unusually polarized, sensitive, and ornery; the credibility and influence that science holds with leaders and the public relies on scientists being seen as neutral third-party technical experts. But then again, water resource science isn’t quantum loop gravity. We’re practical people engaged in a practical science, and it’s not like my colleagues and I never contemplated the intersection between hydrologic science and society.

So I offered the audience this fundamental, if vague, response: if we want to maintain forward momentum irrespective of whichever party wins any given election, it’s important we build a wide base of support by rejecting the increasingly commonâ€”and falseâ€”notion that there can only be two ways of viewing the world, one which is protective of water, rivers, and the environment, and the other not.

I also posited that this should not be too hard to accomplish, because while there are different ideas on how to best manage water, just about everyone agrees it’s important, regardless of whether you live in the city or the country, on the coasts or in the interior of the continent, in a blue state or a red state.

But if I was asked that question again today, I’d add this key corollary: the Trump administration;s drive to renew America’s infrastructure offers powerful, if perhaps unexpected, synergies with pushing water resource science forward. At first glance, infrastructure renewal may seem less about science and more about the tough but wise decision to allocate funds for long-term investments that in most years don’t seem like an immediate priority. But if we’re going to repair America’s increasingly rickety water infrastructure, let’s do it right, making focused investments in the applied scientific R&D needed to ensure a new generation of infrastructure is designed to support the needs of the American people and the American economy for another hundred years.

Rivers and their infrastructure, like dams, reservoirs, and canals, matter for absolutely everyone. Examples range from the obvious to the surprising. Rivers deliver drinking water, irrigation water for growing food and brewing beer, and the large amounts of water required for industrial processes ranging from building cars to building computers. Rivers drive hydroelectric turbines, keeping the lights on and the economy in motion. Flood control infrastructure keeps us safe, and healthy rivers generate recreational, tourism, and fisheries dollars.

Rivers provided the transportation pathways by which early America was explored and through which it developed its own unique culture: think of the Lewis and Clark expedition, Mississippi gambling steamboats, and Huckleberry Finn. Even victory in WWII and the ensuing Cold War owed much to river infrastructure: aluminum used to build fighting aircraft, and uranium and plutonium in the first atomic bombs at White Sands and over Imperial Japan and subsequently in the growing US nuclear arsenal, were produced using copious hydroelectric power generated by Columbia River dams in the west and the Tennessee Valley Authority in the east. Harnessing and effectively managing water has been, and will continue to be, central to the economy, defense, and psyche of America.

While tremendous technical prowess and monetary investments went into our current water systems when they were first built–think of marvels like the Hoover Dam–today, much of our water infrastructure is old and either failing or otherwise not performing at the level America requires in the 21st century. The Oroville Dam incident and associated evacuation last winter is a potent reminder. There are many other examples: silting up and end-of-design-life for many dams nationwide; difficulties with fish passage and aquatic habitat, with implications to ecological health and therefore recreation, tourism, and commercial fisheries dollars; the ongoing saga of flooding in New Orleans, tied in part to Mississippi flows and the sometimes controversial control structures on it; and above all, the insufficient capacity to match the water and power needs of growing populations and economies, especially in the west. Cleary, renewing America’s rivers is a fantastic direction for the infrastructure investments President Trump wants to make.

To do this right, we need not only concrete and pipe but also a focused, goal-oriented investment in developing the science and engineering knowledge needed to ensure these rejuvenated systems do their job effectively and safely for a long time to come. We need to better understand both the natural and human-induced hydroclimatic variability of river systems so that infrastructure and associated decision support systems can be designed to better handle both flood and drought. We need to develop and test new principles for water infrastructure and river management that return the natural ecological functioning so important for tourism, fishing, and other industries. We need to discover new approaches that minimize the future maintenance budgets required for that infrastructure, and to invest in technologies that contribute to water conservation, ranging from fixing and updating leaky water distribution lines to promoting water-efficient manufacturing and agricultural processes.

We must enhance flood and water supply forecasting systems to further improve the efficiency of reservoir planning and management. Diversify the water portfolio; innovative work with desalinization plants and groundwater production from brine aquifers in California and Texas may provide an example. Ensure that every city in America has the infrastructure it needs to provide its citizens with a clean and safe drinking water supply; don’t let Flint happen again. And following the established pattern of history-making federal government-led successes, from the Apollo program to winning the Cold War, spread these investments in innovation across organizations and sectors, including academia, government, NGOs, and the private sector.

So, what will be the implications of the new administration for America’s rivers? That depends. If President Trump plays his cards right with his planned infrastructure investments, he could leave a tremendously positive long-term legacy around rivers, science and the economy.