Water. How Much, What Kind?

Expert Opinions on Hydration, Sports Drinks, Caffeine, and More, Followed by an Opinion on Water Experts

Editor’s Note: The Gazette has frequently made the point that the “eight glasses per day” recommendation for drinking water consumption is nonsense.  We believe that some people need large amounts of water and others can probably get by quite well on the water they get from food they eat. The following excerpt from the Las Vegas Review-Journal makes some interesting points on water consumption that we would like to pass on.  The main body of the article reports a very praiseworthy program in Las Vegas which is establishing “hydration stations” to provide filtered water to Las Vegas students as an alternative to soft drinks. –Hardly Waite.

Excerpted from With summer heat gone, proper hydration is still essential from the Las Vegas Review-Journal.

Dehydration is no laughing matter. Studies have shown that about 75 percent of the U.S. population is in a perpetual state of dehydration and probably doesn’t know it.

“It’s like anything else that builds up, you assume a threshold and people don’t realize how they’re supposed to feel,” said Marjorie Nolan-Cohn, a registered dietitian and spokeswoman for the Academy of Nutrition & Dietetics.

Heat-related injuries climbed 133 percent between 1997 and 2006, according to the American Journal of Preventive Medicine. Nearly half of those involved youths. In the past five years, the number of heatstroke deaths for overexerted youths is five times higher than in any five-year period during the past 35 years, says Douglas Casa, a professor and heat stroke expert at the University of Connecticut. 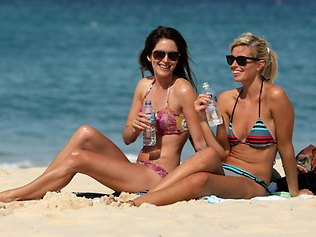 It should be no great news that you need more water in hot weather than in cold,  and more when you’re active than when you’re not, and more if you live on potato chips than if you eat raw salads and fruits.

Depending on activity level and other factors, suggestions on the amount of water a person needs can vary widely. Nolan-Cohn tells her clients that drinking half one’s body-weight in ounces is a solid rule of thumb. For example, a 200-pound person should consume 100 ounces of water in a day. The dietitian also says clients are always surprised at how much positive change occurs by simply drinking more water.

“Clients come in all the time and are shocked by how much better they feel. Their skin clears up and they have energy,” she said.

Girourd, whose work primarily involves competitive athletes, uses weigh-ins before and after workouts or competitive events to gauge an athlete’s hydration level. For each pound of weight lost in a workout, an athlete needs about 16 ounces of water to replenish the system. Once someone loses 2 percent of body weight, performance is affected. A 300-pound football lineman, for example, could lose 15 pounds in a strenuous workout, he added.

“You want to drink ahead of the thirst. That’s a difficult message to get across to people. But with athletes when you tell them (dehydration) will directly impact performance, they get it,” he said. “It doesn’t take much to lose 2 percent, especially in this climate.”

Girourd also encourages athletes to take a more personalized approach to assessing their hydration. Charts are hung in athletic facility bathrooms at the school that show the color of healthy urine. A light yellow color usually means proper hydration. A darker, more apple juice-looking urine signals dehydration. Some athletes who are experiencing constant dehydration will have gastrointestinal problems, too, Girourd said.

Nolan-Cohn also said dehydration can bring a strong smell to urine. Other symptoms to watch out for are: not going to the bathroom all day, slow muscle recovery, leg cramps, soreness, headaches, dizziness, water retention (puffy fingers and legs), hunger or sugar cravings not long after eating, and fatigue.

One reason for decreased energy in a dehydrated person is the impact on the heart. Dehydration creates a lower blood volume in the heart, forcing the organ to work harder. The heart may add three to five extra beats per minute for a dehydrated person, Girourd noted. It’s not a huge factor for the everyday person, but, again, when dealing with athletes who feel fatigue, motivation to rehydrate sets in.

And, as Nolan-Cohn explained, even everyday people can feel an energy boost just by being properly hydrated and having their hearts not working as hard.

Girourd also points out the importance of acclimatization. This is an issue particularly for sports teams that visit the valley from more traditional four-season environments. He said it really takes about 14 days for a body’s thermal regulatory system to adjust to the climate shift.

But the information also applies to local students coming back to school for fall sports after being indoors much of the summer avoiding heat. As a result, local high school fall sports teams limit the length of training sessions for the first two weeks of training, Girourd said.

Sports drink sales this year climbed to more than $4.1 billion though April, a State of the Industry analysis from Beverage Industry magazine showed. That may sound a bell for profits, but it’s not all in the good name of hydration.

Marketing teams have brilliantly targeted children with new logos and ever-changing drink colors. And they may be trying to sell children something they don’t need.

Athletes competing at a very high level may need the glucose and electrolyte minerals, such as sodium and potassium, that are in present in sports drinks. But kids and people playing recreational sports may not need the kind of boost, or the calories, sports drinks pack.

Chris Salas, a local personal trainer, asserts that water is the ultimate nourishing agent, not the colorful sports drinks so many kids are enjoying. He said even drinks such as Vitamin Water are not all their marketers claim them to be.

“They’re not squeezing fruit into those bottles. They’re using a chemically engineered fruit-flavored product and it’s nothing like water and fruit,” he said.

Salas said if someone is dehydrated in the middle of a workout, particularly someone with low blood sugar, a small amount of juice with plenty of water is a better cure. In intense athletic training situations, Girourd highly recommends a sports drink. But for the normal person on a 2,000 calorie-a-day diet, he uses some common sense.

“I say, ask yourself: ‘Does that (number of calories) play into your normal caloric intake level?’ ” he said.

But while Girourd isn’t against sports drinks as much as Salas, he also believes the industry’s marketing is misrepresenting the drinks. One egregious example is in public schools, where many cafeterias have ditched sodas in vending machines and replaced them with bottled water and sports drinks.

“Schools are thinking Gatorade is a health drink and that’s not accurate,” he said. “It’s absolutely what athletes need, but it’s not what the sedentary person needs.”

But Girourd also said it’s important to address the common knock against water: taste. Diluting a sports drink is one answer. That way a little taste is given to the drink without the heavy calorie and sugar intake. But Girourd has also found through research that water temperature between 50 and 59 degrees is ideal enough to satisfy the taste problem, too.

“Research shows people prefer the cooler temperatures for their drinks, and it works,” he added.

There are also hydrating food options. Fruits and vegetables are made up primarily of water in the first place. And with the many vitamins and minerals naturally contained in them, these foods are a better electrolyte enhancer than any drink on the market, Salas said.

“I highly recommend watermelon to my clients,” he added. “It’s hard to beat.”

For years, health experts counted coffee as a diuretic. More recent research is indicating that it may not be after all.

And now more and more athletes are looking to caffeinated substances before competition to give that extra boost, too. Experts appear to be proceeding with caution on the subject. For Salas, who himself is a coffee lover, he counterbalances water intake with a coffee beverage and encourages clients to do so, too.

Girourd said carbonated beverages are a bigger problem than coffee. They delay gastrointestinal emptying and can bring an uncomfortable feeling of fullness while exercising, he noted.

“Those are the drinks you really need to avoid,” he said.

Editor’s PS:  I could not resist including a reader’s comment.

I wonder how we made it? Chopping cotton in Arizona’s 120+ heat no shade. The water for the crew was a large barrel in the back of a pickup with one dipper that everyone used. My water was a muddy hot “Desert Water Bag” hung on the hot fender of a dark green Oliver Tractor. You worked 12 hours a day and then after work there were no air conditioned homes to return to. Worse than being uphill both ways we had no super educated Guru to tell us when to drink “water”. The body has a built in thingy called thirst. The auto thirst buzz would come on when you needed water. Amazing. If the thirst buzz was ignored it would keep nagging and drive you to do anything even kill others for water. We could have sure used that Nolan-Cohn and other learned experts as water boys.

Read the Full Article in the Las Vegas Review-Journal.