Plentiful Food May Encourage the Spread of Infections

According to an article in Science Daily, studies conducted in Edinburgh using the lowly water flea as subject have shown that having plentiful food can speed up the spread of infection.

Researchers found that when a population of parasite-infected water fleas was well-fed, some of them became highly contagious.  Compared with when food was limited, the well-fed fleas spread infection at a much greater rate. 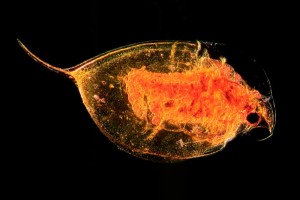 Scientists say the discovery emphasizes that, under certain conditions, some individuals may be more prone to spreading disease than others. The reason, possibly, is that the well fed fleas were able to survive longer, thus giving the infection more time to multiply.

Scientists at the University studied the impact of food quantity on the spread of a bacteria parasite that grows in the water flea gut, releasing infectious spores when the water flea dies. The well-fed water fleas were generally found to be carrying many more parasites than the others.