Water Everywhere, Nor Any Drop to Drink

Not far from Lake Michigan, city yearns for water

WAUKESHA, Wis. (AP) — Lake Michigan is just 15 miles from this city of 70,000 in the Milwaukee suburbs. But these days it seems like a gigantic, shimmering mirage, tantalizingly out of reach.

The aquifer that has provided most of Waukesha’s drinking water for the last century has dropped so far that what’s left has unhealthy levels of radium and salt. The city would like to draw from the Great Lakes, just as more than 40 million people in eight states — from Minnesota to New York — and two Canadian provinces do every day.

If only it were that simple. 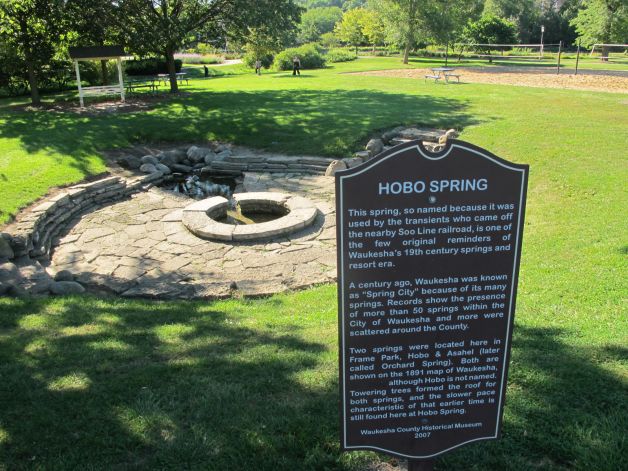 This photo taken Sept. 13, 2013, shows Hobo Spring, located in a park in Waukesha, Wis. It was among many springs in Waukesha, which once was famous for its mineral-rich waters, but the city is now seeking permission to draw from Lake Michigan to meet its needs. The aquifer that has provided most of Waukesha’s drinking water for the last century has dropped so far that what’s left has unhealthy levels of radium and salt. The city would like to draw from the Great Lakes, but the states with rights to it have always guarded them jealously and aren’t in a generous mood after more than a decade of abnormally low levels. Their permission is required to tap in from outside the watershed, and approval for Waukesha _ which lies barely on the wrong side of the line _ is far from certain

Though the lakes are so vast they hold one-fifth of all the fresh water on the earth’s surface, the states with rights to it have always guarded them jealously and aren’t in a generous mood after more than a decade of abnormally low levels. Their permission is required to tap in from outside the watershed, and approval for Waukesha — which lies barely on the wrong side of the line — is far from certain.

The ban on piping Great Lakes water beyond the boundary was established five years ago to keep the drought-stricken Sun Belt from siphoning off the region’s greatest resource. But it’s also creating winners and losers in the economically strained states around the lakes.

Waukesha’s request is a test case of whether the ban will cause neighbor-versus-neighbor clashes as cities in the Midwest fight for any advantage in luring jobs and people. Many hope to build economies around water-based technology, even as heightened demand and climate change create shortages.

A recent report identified at least seven other cities in Wisconsin, Indiana and Ohio that are in the same predicament as Waukesha and may come calling for lake water.

“The Great Lakes aren’t a cooler full of water to parcel out,” said Joel Brammeier, president of the Alliance for the Great Lakes, which produced it. “They’re a globally unique ecosystem.”

“It doesn’t make sense to locate a business in a place that doesn’t have safe drinking water,” said Brian Nemoir of the Waukesha County Business Alliance.

What separates the haves from the have-nots is a curving watershed boundary that encircles the five inland seas, edging almost to their shores in some places and more than 100 miles away in others. Hard-luck Waukesha is a scant 1.5 miles west of it, in the Mississippi River drainage basin.

But because it’s in a county that straddles the line, Waukesha could qualify for an exception, according to the region’s water use rules. The challenge is convincing the states.

Years ago, its mineral-rich springs drew streams of visitors — former President Ulysses Grant and Mary Todd Lincoln among them — in search of their reputed healing powers. A plot to pipe Waukesha water to Chicago for the 1893 world’s fair was foiled when outraged locals repelled a trainload of laborers.

But development and pumping took their toll.

Under a federal order to find a new source, the city is applying to use 10.1 million gallons a day from Lake Michigan. A veto by just one of the eight states would scuttle the request.

Waukesha also could draw from the Fox River, which flows through town, but that would damage wetlands, and the river’s flow is unreliable, said Dan Duchniak, general manager of the Waukesha Water Utility. Other options, including desalination, would be hugely expensive.

The request is the equivalent of “a teaspoon out of an Olympic-sized swimming pool,” said Duchniak, which no one disputes.

But some skeptics suggest Waukesha wants a license to sprawl and others fear setting a precedent for countless other communities.

“If you do it for one, why shouldn’t you do it for another?” said Keith Hobbs, mayor of Thunder Bay, Ontario, a city on Lake Superior.

The resistance illustrates how attitudes about water differ between regions, said Noah Hall, a Wayne State University law professor who helped draft the water use compact.

In the Southwest, people believe in hauling resources where they’re needed. In the Great Lakes, he said. “Our culture and our legal system are based on keeping the water where it naturally occurs and using it where it’s found.”

There is also the economic rivalry between Milwaukee and its suburbs, which some feel have siphoned off jobs from the city.

“They will be very cautious about tipping their hand until they have to.”