In a Nutshell:  The strange, frightening and sometimes tragic phenomena called sinkholes, aka sinks, snake holes, swallow holes, dolines, and more, are natural depressions or holes in the Earth’s surface whose causes are shadowy and  whose occurrence is usually unexpected. They are closely related to water and its mysterious ways.

Sinkholes are in the news these days, both for their sudden and frightening appearances and for the implications they have for surface- and groundwater quality.   This article from the New Yorker has a detailed and fascinating history of how and where they occur. It recounts, among other events, the 1999 disappearance of Florida’s Lake Jackson; the 4,000-acre lake emptied “like a bathtub emptying into a drain,” although the drain in this case was an 8-foot-wide sinkhole. Sometimes the lake would partially refill as water cam back up through the hole.

Where did the water go? And where was it returning from when it refilled the lakebed? The vast underground limestone caverns that underlie Florida and parts of several other states. 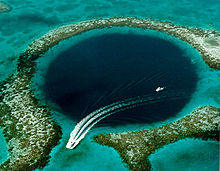 A famous sinkhole in Belize.

A sinkhole is what happens when a breach occurs between the underground realm and the surface—as it did in Lake Jackson, as it did several weeks ago underneath a house in a Tampa suburb, and as it does in hundreds of other cases, large and small, wherever such karst topography exists. The occurrence of sinkholes can be exacerbated by too much water—they tend to open more frequently during tropical storms, for example—as well as by too little water. In 2010, heavy irrigation (actually, the constant spraying of water on strawberry crops to keep them from freezing during a cold snap) lowered the water table in an area near Tampa by 60 feet in a week, and 140 sinkholes appeared.The porosity of the underground terrain, and the free movement of water through it, has some serious implications for water quality. Something that infiltrates the ground in one place can show up miles away.  This article from Stormwater describes how the process works in West Virginia and how the Department of Agriculture monitors water quality there, in part to gauge what effect farming operations and crop fertilization are having on the water supply.) Urban pollutants in stormwater runoff are entering the aquifer, too. The New Yorker article says that Tallahassee used to recycle its treated wastewater by using it for farm irrigation, until it discovered several years ago that doing so was causing elevated nitrogen levels far to the south, in the Wakulla River, where no one had expected the irrigation to have an effect. The nutrients reach the river through the ground. Florida’s Department of Environmental Protection has taken to injecting dye into some sinkholes—much the same procedure, on a larger scale, that we use to detect illicit storm sewer connections—and seeing where it shows up downstream.