Without wastewater treatment, diseases and infections would ravage our society.

Believe it or not, much of the modern wastewater management technology we consider standard in any 21st century home, things like toilets and sewer pipes, are actually relatively new in the grand scheme of history.

The history of wastewater treatment

That’s not to say that sewer systems haven’t been around for ages. After all, the ancient Romans had a complex system of sewers at the peak of their empire. Rather, the knowledge of how poorly managed wastewater can drastically impact the health of society is relatively new.

The Romans had a centralized sewage management system, although it was fairly rudimentary by today’s standards. Open and closed ditches and pipes would carry away excrement and trash, primarily using rainwater runoff. The contaminated water would then flow into large concrete tanks that let the sewage settle out before the water was allowed to flow into the nearby rivers. There was indoor plumbing, and public latrines were also built over the sewers.

In medieval Europe, closed sewers, stone conduits, or ditches were used to drain sewage away from residential areas, often in conjunction with septic tanks, but chamber pots were often dumped directly onto the streets. Between 1858 and 1859 the Thames in London was chock full of untreated wastewater, which combined with very hot weather to cause what became known as “the Great Stink“.

The 17th and 18th centuries saw a rapid expansion in waterworks and pumping systems, but the Industrial Revolution led to even more rapid growth of cities and pollution, which acted as a constant source for the outbreak of deadly diseases like cholera and typhoid.

As cities grew in the 19th century, increasing public health concerns led to the development of municipal sanitation programs and the construction of sewer systems in many cities. These systems often discharged sewage directly into rivers without treatment, but by the late 19th century, chemical treatments and sedimentation systems were in use in many cities.

The construction of centralized sewage treatment plants began between the late 19th and early 20th centuries. These systems passed sewage through a combination of physical, biological, and chemical processes to remove pollutants. Also beginning in the 1900s, new sewage-collection systems were designed to separate storm-water from domestic wastewater, to prevent treatment plants from becoming overloaded during heavy rains.

In the 1910s and 20s, engineers developed more sophisticated systems to treat drinking water before it was supplied to residents in cities.

In the 1910s and 20s, engineers developed more sophisticated systems to treat drinking water before it was supplied to residents in cities.

Stepping back for a moment and examining the timeline here, we can begin to understand just how recent effective wastewater treatment on a grand scale appeared. Roughly 150 years ago was the first few centralized instances of water treatment for cities. It would take decades for more rigid practices to emerge.

In 1972, the Clean Water Act was passed in the United States. Up until this point, sewage treatment for some cities still relied on chemical treatment and filtration, and the treated sewage was often dumped into rivers and streams. There was little in the way of pretreatment of industrial wastewater to prevent toxic chemicals from interfering with the biological processes used at sewage treatment plants.

After the passage of the Clean Water Act, cities started a process known as secondary treatment, which removes all the pollutant organic materials from the effluent. Wastewater with high concentrations of organic materials and nutrients being dumped into rivers was causing algal blooms and the bacteria growth, which created dead zones in rivers. The secondary treatment essentially eradicates the effluent of microorganisms and organics so that when it’s discharged, it has little effect on the surrounding environment.

To think, just 50 years ago many communities in the world were dumping mostly untreated sewage into rivers.

Wastewater treatment processes have really experienced their most rapid growth in the last 30 or so years, now with every planned municipality in the world having some form of a centralized wastewater management system. It’s all at a hefty cost too – on the scale of billions and billions of dollars.

Now, however, we can flush our toilets and shower without really having to worry about what’s happening to all that dirty water. It gets handled by trusty wastewater treatment plant operators before being discharged into local rivers and lakes. “Oh, and what happens to all the solids from wastewater?” you might wonder. Well in some cases, wastewater treatment plants will let it dry, package it up and sell it as fertilizer to help supplement the hefty costs of running a treatment plant.

In other cases, some plants will use the sludge to produce methane, which they will then burn for power or sell. Wastewater treatment today uses science and engineering, though it is still a little bit smelly. We suppose it comes with the territory.

Now that we understand just how recently our knowledge of sanitation when it comes to human waste has emerged, let’s take a closer look at exactly how wastewater treatment plants work. 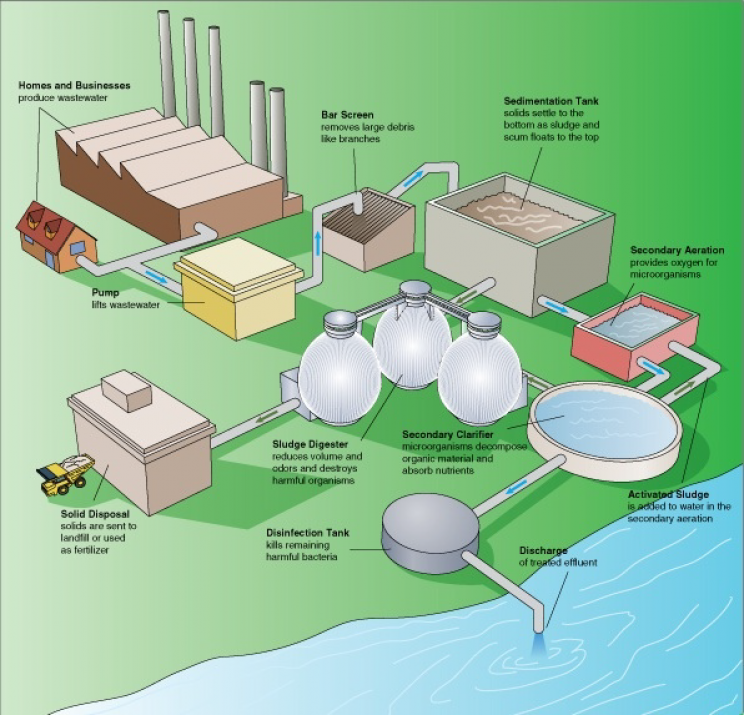 When you flush a toilet, your waste flows through the sewers to a wastewater treatment plant that treats it. Sewer systems are a topic all their own, so we’ll mainly focus on how your wastewater goes from one of the dirtiest substances on the planet back into water that’s safe for the environment, and in theory, safe enough to drink. Some wastewater plants known as full-cycle reuse plants will even take wastewater and treat it all the way back to drinking water, which will then be pumped to city inhabitants. This may sound gross, but today’s level of engineering and chemistry allow full-cycle reuse plants to output drinking water chemically identical to what’s in your tap right now.

So society produces a lot of waste. Let’s see what happens first when it arrives at a wastewater treatment plant.

When wastewater arrives at a treatment facility, it first gets all the large chunks filtered out through a screen, a rather large one. These screens are generally called bar screens, and their main job is to make the sewage more homogenous so it can flow through pumps and pipes in the plant.

The waste removed from bar screens is sent off to the landfill, and the slightly less chunky sewage heads to the next step, the grit chamber.

Grit chambers are essentially just big pools that you definitely don’t want to swim in, they allow the larger particles in the sewage to settle out to the bottom. These larger particles, things like dirt, sand, and large food particles, are called grit. Again, this process aids in making the sewage more homogenous than when it came in. The grit is also trucked off to landfills.

After the sewage gets pretty homogenized in these first few processes, it moves onto the primary clarifiers.

Primary clarifiers function as giant settling basins that allow particles larger than 10 μm, referred to as suspended solids, to settle out to the bottom of the basin. A giant skimming arm also scrapes away fat and grease that rise along the surface of the water.

Upon leaving the primary clarifiers, the sewage is free of solids bigger than 10 μm and at this point, is mostly contaminated with organic matter. The sewage then moves on to aeration basins, beginning the secondary treatment processes.

Aeration basins are essentially bubbly hot tubs for sewage. They bubble up air through the bottom of the sewage, which invigorates the sewage with dissolved oxygen. Engineers also pump in activated sludge into aeration basins, which is essentially bacteria and waste from the next round of clarifiers. This activated sludge raises the oxygen content of the water and the bacteria go on a feeding frenzy, eating up all of the organic matter.

After the aeration basins, the sewage is going to look a lot clearer and it will head onto the secondary clarifiers. This is the final filtering process, where all the remaining particles settle out. The stuff that settles out is that activated sludge that we just mentioned, and a part of it is reused to make the aeration basins run smoothly. What isn’t used is left to dry out before it’s disposed of or used as fertilizer.

By the time the sewage leaves the secondary clarifiers, 85 percent of all organic matter has been removed and it will look fairly clear. It might also be safe to drink too, but you’re probably not going to want to. The final process before discharge is disinfection.

This process kills off all the bacteria still left in the water and makes sure there aren’t any diseases being discharged into rivers. This is typically done through chlorine, ozone, or ultraviolet disinfection (or a combination of these).

Ozone disinfection involves discharging electricity into the water to cause oxygen gas molecules to turn into ozone molecules, which oxidizes the bacteria, causing their cell walls to break, and kills them.

Chlorine treatment kills the bacteria in a similar manner but is a liquid chemical added to the water, and the treatment plant operators will generally remove the chlorine before releasing the effluent so the chlorine doesn’t damage the environment.

Lastly, engineers can also use ultraviolet light to scramble the DNA of the bacteria, making it impossible for them to reproduce. All three of these processes have different pros and cons and are used fairly interchangeably across the world.

In most cases, after disinfection, the water is released into rivers and streams. In regions where water is scarce, sometimes the treated wastewater will head back for another round of treatment to be made into drinking water. Chemically, this is very safe and could probably be used in many more places around the world if it wasn’t for the stigma surrounding the closed-loop process of turning wastewater back into drinking water.

The entire process takes around 24 to 36 hours for a molecule of water to make it through the treatment plant.

And that’s the magic of wastewater treatment. It’s an essential process that allows us to live our lives without having to think about our own waste. Be sure to thank all the wastewater treatment plant operators around you, because they have to deal with what you don’t want to, 24/7.