The Gazette gives its highly coveted Hero Award to Amy Russell who walked 500o miles for a very good cause.  Below is the Independent’s account of her adventure.

The 24-year-old Manchester native and founder of the charity Walking4Water has ended her trek through Africa, six months and 2,000 miles earlier than planned.

Health problems and political unrest in her planned destination of Egypt caused her and walking partner Aaron Tharp to stop their walk, she said. They plan to fly home on Sunday. 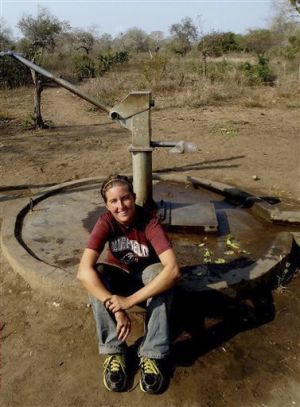 Amy Russell at a watering hole in Mozambique in August of 2012. She walked on for another year after the photo was taken.

“I guess `officially’ we ended in Negele, Ethiopia,” she said via Facebook chat from Addis Ababa, the Ethiopian capital. “Random town … but the point where everything plus people throwing rocks at us every day just, where we decided to be done.”

Russell and Tharp, 26, of Trenton, Ohio, were the last two walkers standing from a journey that was supposed to include about 10 people.

Most of the other would-be walkers backed out before Russell’s journey began in South Africa in February 2012. A third member of the team, 25-year-old Marty Yoder of Elkhart, Ind., who had been driving the support vehicle, went home with health problems when the team was in Mozambique.

That left Russell and Tharp with their shoes and backpacks. They camped or stayed with missionaries or local families, traveling north through South Africa, Mozambique, Malawi, Tanzania, Kenya and Ethiopia. Russell went through seven pairs of shoes and lost about 40 pounds.

“The biggest challenge was probably just living in constant instability, we never stayed in one place very long,” Russell said. “So every day, we had to find food, had to find water, had to find a place to stay. Always dealing with a language barrier, always changing circumstances. Dealing with that mentally was probably the hardest.”

They had physical problems as well. Russell contracted malaria in Mozambique. They both got sick a number of times from drinking brackish water, and Tharp developed knee problems, Russell said. They also spent one night in Kenya huddled in a tent with a machete after noticing lions in nearby bushes.

Russell called it the most terrifying experience of her life.

“Throughout the remainder of the night, we heard yet another lion, another elephant, a two-minute lion-elephant showdown, and a couple hyenas,” Tharp wrote on his blog. “Morning never looked so beautiful!”

But it was the people that Russell said will leave a lasting impact on her.

She recalled a day she spent in a Kenyan village, going with other women and children to gather water from a hole that was a 15-minute walk away.

“From this `puddle’, maybe you could call it a small pond, we filled the jerry-cans, and walked back with them,” she said. “This water, murkier than potato soup, was what they drank directly from, without any fears or qualms.”

Russell is disappointed she wasn’t able to walk all 7,000 miles, but she’s proud she made it as far as she did.

“Instead of transforming everyone else’s life (I’m not sure I made a huge impact for others), it seems my life has been the one transformed in the process,” she said.

Russell hasn’t decided what she will do next. She will begin looking for a job and is considering graduate school.

For now, she just wants to be home, perhaps with a pizza.

“I definitely plan on doing talks, sharing the experience if people are interested,” she said. “Not sure writing a book is a good idea, but haven’t eliminated the option completely. NO MORE WALKING lol.”