USGS Report on Pesticides in Streams 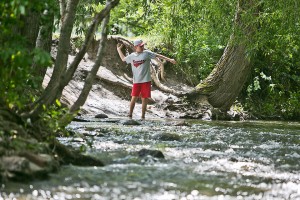 A new U.S. Geological Survey study shows that pesticides continue to infiltrate the nation’s streams, however, the types of pesticides mixing with the water are changing.

As part of a continuing survey of water quality, USGS scientists found that, over the past decade, one or more pesticides still contaminate close to 100 streams sampled nationwide, indicating that the problem is pervasive.

“The information gained through this important research is critical to the evaluation of the risks associated with existing levels of pesticides,” said William Werkheiser, USGS associate director for water.

Scientists analyzed stream samples collected regularly between 2002 and 2011 for pesticides, which include both herbicides and insecticides. They also divided streams into agricultural, urban and mixed-use categories.

The high occurrence of pesticides between 2002 and 2011 was consistent with findings from the previous decade, 1992 to 2001, but now fewer streams exceed the human health limits for pesticides. Only one stream exceeded the health standard this decade, compared to 17 percent of agricultural streams in the previous decade.

However, water quality is still bad for aquatic life, such as frogs, fish and insects. Nearly two-thirds of agricultural streams and half of mixed-use streams had pesticide concentrations that exceeded limits for aquatic life in both decades.

The authors noted a change in the pesticides present between one decade and the next, which is one of the reasons they say direct comparison between decades is problematic.

They credited most of the change to pesticide regulation by the Environmental Protection Agency causing a reduction in the use of some toxic pesticides.

For example, in the 1990s, the herbicide cyanazine was found to cause birth defects and could leach through the soil into the groundwater, so cyanazine use dropped.

Residential use of the insecticide diazinon also dropped in 2004 after it was shown to be highly toxic to birds and bees.

Concentrations of both cyanazine and diazinon have dropped in samples from the recent decade. In the meantime, though, new pesticides were developed, and their concentrations have surged.

The insecticide fipronil, for example, was approved for use as recently as 1995, so it wasn’t widely used during the first sampling decade. Since then, studies found that the fipronil concentration steadily increased in urban streams between 2000 and 2008, indicating increasing use in residential areas.

Fibronil disrupts an insect’s central nervous system. That means that, like diazinon, it also kills good insects such as honeybees.

A 2003 University of Greenwich study found that fibronil degrades into a more toxic substance that can accumulate in fish.

The recent decade of sampling found that six main pesticides, including atrazine and fipronil, were found in all streams at least half the time, and fipronil exceeded the concentration limit for aquatic life in 20 percent of streams.

The insecticides fipronil and carbaryl were found in urban streams more than half the time.

The authors say the other major change has been the switch to the herbicide glyphosate, made possible by the increased use of genetically modified crops.

Glyphosate levels weren’t included in this report because scientists can’t easily measure how much is in streams.

Some research has indicated that glyphosate is also contributing to honeybee colony collapse.