“Almost every military site in this country is seriously contaminated,” said John D. Dingell, a soon-to-retire Michigan congressman who served in World War II. “Lejeune is one of many.” 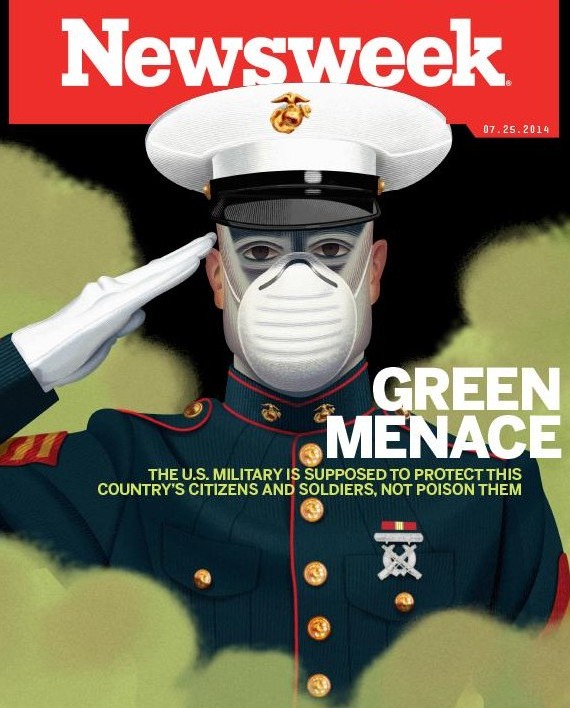 Over the years, the US military has been the unquestioned leader in water pollution.  Newsweek for 7-25-14, cover pictured above, features an excellent study by Alexander Nazaryan of the military’s environmental crimes over recent decades, concentrating on Camp Lejeune in North Carolina.   As the article points out, however, Camp Lejeune is only a small part of an ugly picture of the US military’s war on the environment.

These military sites form a sort of toxic archipelago across the land: Kelly Air Force Base in Texas, where the Air Force allegedly dumped trichloroethylene (TCE) into the soil, part of what some residents call a “toxic triangle” in south-central Texas; McClellan Air Force Base near Sacramento, California, which includes not only fuel plumes and industrial solvents but also radioactive waste; Umatilla Chemical Depot in the plains of northern Oregon, where mustard gas and VX nerve gas were stored; Rocky Mountain Arsenal, a onetime sarin stockpile just north of Denver; the Massachusetts Military Reservation on Cape Cod, poisoned by explosives and perchlorate, a rocket fuel component that is emerging as a major Pentagon pollutant. But because Camp Lejeune’s abuses and betrayals are more flagrant, it has become a test case for whether the military can defend our soil without ruining it.

Here is an excerpt from a detailed study which we urge you to read in its entirety.  It focuses on one of many health problems, male breast cancer,  caused by the military’s lack of environmental concern.

Camp Lejeune, built in 1941, is 240 square miles in area, making it the largest Marine base east of the Mississippi River, and the second largest in the nation after Camp Pendleton, near San Diego. Situated at the swampy mouth of the New River, it is an ideal training ground for the sorts of amphibious assaults that are the Marines’ favored means of arriving at the war dance. From here, leathernecks shipped out to the Pacific theater of World War II, Korea and Vietnam. The Marines killed in the 1983 terrorist bombings of a barracks in Beirut had also come from Lejeune; a memorial to them sits in a wooded glade at the camp’s edge.

In the decade before Camp Lejeune was built, the chemical industry saw the advent of the “safety solvents” TCE and tetrachloroethylene (PCE). These were chemical cleaning agents of the organochlorine group: TCE was a degreaser for machine parts; PCE was used in dry cleaning.

A military base is rife with machines. This sounds obvious, but it’s quite striking when you see all those tanks and airplanes and amphibious vehicles that seem perfectly poised for battle, even on a humid North Carolina afternoon when overseas wars might as well be waged in another galaxy. Part of that readiness is cleanliness, which your average military mechanic would have achieved, until very recently, by washing grease-covered parts in TCE.In 2004, a former Marine named Joseph Paliotti decided to clear his conscience. He was on the verge of perishing from cancer, and he suspected that Camp Lejeune had something to do with it. He had spent 16 years working on the base. “We’d come down there, we used to dump it: DDT, cleaning fluid, batteries, transformers, vehicles,” he told his local television station. “I knew sooner or later something was gonna happen.” Several days later, Paliotti died.

The cleaning of clothes might seem like a more innocuous matter, but that’s only because most people don’t have much of a notion of how a dry cleaning enterprise works. You surrender your clothes; they return immaculate. Magic! As it happens, the chemicals that cleanse a shirt are about as carcinogenic as those that cleanse an airplane engine.

One of the places at Camp Lejeune that could care for your uniform was ABC One Hour Cleaners, which sits just a few yards from the edge of the base. The dry cleaners, which started operation in 1964 and ended on-site cleaning service in 2005, did nothing different from what thousands of other dry cleaners did around the United States: It used PCE as a cleaning solvent. Some of the PCE sludge was used to fill potholes, while much of the liquid waste ended up in the ground, just like the TCE used to clean machines across the road, behind the barbed wire.

The TCE and PCE percolated through the sandy soil of Camp Lejeune and into the shallow Castle Hayne aquifer, from which the base drew its water. Also flowing into the soil was benzene from the Hadnot Point fuel farm. A component of gasoline, benzene is an aromatic hydrocarbon. Its name does not mean that it is pleasantly pungent. Instead, the deceptively alluring adjective refers to the strong carbon-hydrogen latticework of the compound. Like other aromatic hydrocarbons, benzene is a carcinogen that readily enters the body.

An Associated Press report found that as “late as spring 1988, the underground tanks at Hadnot Point were leaking about 1,500 gallons of fuel a month—a total of more than 1.1 million gallons, by some estimates.” Eventually, the leaked fuel would form an underground layer 15 feet deep, a carcinogenic band essentially covering the aquifer from which the drinking water was drawn.

Among those who drank that water was Mike Partain, who was born on base. His father was a Marine, as was his grandfather. He lived in the same housing complex where the Ensmingers conceived their daughter Janey. He joined the Navy but was discharged because of a debilitating rash that would overtake his body without explanation. Eventually, Partain ended up in Tallahassee, Florida, where he was a teacher and, later, an insurance adjuster.

Then married with four children, Partain was in good health until the age of 39. (He has since divorced; “my marriage didn’t survive Lejeune,” he told me.) Toxins, like terrorist sleeper cells, are patient. As he would later write for the website of Semper Fi, a documentary about Camp Lejeune, in April 2007 “my wife gave me a hug before bed one night. As she did, her hand came across a curious bump situated above my right nipple. There was no pain, but it felt very odd.” Partain went for tests, which revealed an almost incredible diagnosis: breast cancer.

Male breast cancer is rare enough in the general population, especially for someone like Partain who has no history of the disease in his family. According to the Agency for Toxic Substances and Disease Registry, only about 7 breast cancer victims out of 1,000 are men. Yet it turned out that many other men who’d lived on Camp Lejeune had developed breast cancer: Partain told me that he knows of 85 victims. Several of these aging men, showing mastectomy scars, posed for a 2011 calendar.

Coincidences do happen, even in cancer epidemiology. What looks like obvious causation to some may be just cruel fate, but the overall infrequency of the disease, combined with its relatively high frequency among the men of Camp Lejeune, as well as the other ailments plaguing those who lived on the base, made clear that there was a connection. “This has all the characteristics of a male breast cancer cluster,” the noted epidemiologist Richard Clapp said at the time. Camp Lejeune is, in fact, now widely believed to be the largest known cluster of the male variant of the disease.