US Is Facing A Water Infrastructure Disaster

Editor’s Note: The combination of unusually cold weather and years of neglect have produced a nightmare this winter in Detroit.  The excepts below, featuring comments from a veteran city plumber, illustrate the dire need for increased funding for repair of our aging water and sewerage systems.–Hardly Waite.

Water main breaks are causing major problems in cities in Michigan and across the country. Pontiac and Bay City in Michigan, as well as Atlanta, Georgia, are experiencing catastrophes as a result of water mains giving way.

The water distribution infrastructure, like that of many US cities, can be over 150 years old in parts. The Society of Civil Engineers, which estimates there are 240,000 water main breaks per year in the US, concluded in its assessment, “at the dawn of the 21st century much of our drinking water infrastructure is nearing the end of its useful life.” The cost for replacing the aging infrastructure over the coming decades could reach more than $1 trillion, according to the American Water Works Association. Instead of meeting these pressing needs, last year, the Obama administration cut funding to water infrastructure programs. 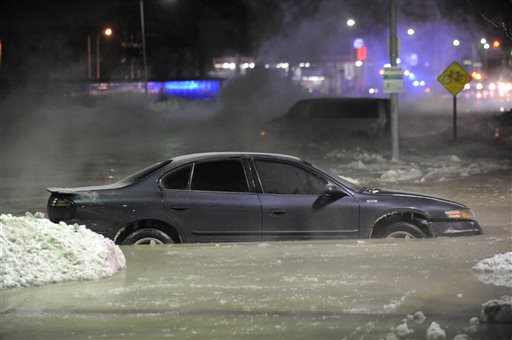 Stephen Paraski, a disabled master plumber from the Detroit Water and Sewerage Department,  spoke to the WorldSocialist Web Site about the infrastructure. “Whenever you’ve got the extremes in the temperatures, you have water main breaks. We averaged maybe 10 percent more in the coldest versus the hottest weather, but we got water main breaks in hot weather too. A lot of it can be attributed to lack of maintenance and the cutbacks over the past ten years in particular.”

Referred to the age of the infrastructure, he added, “In 1995, when we were replacing water mains in Eastern Market we removed an iron pipe that was put in in 1835. We dug up a section of this old cast iron pipe where there was about a six foot section of wood pipe that was still in use. The records show that was put in back in 1825 and then cast iron replaced it in 1835. It had been in service for that long. They used Tamarack logs to make the pipes then.”

Concerning the maintenance of the infrastructure, Paraski continued, “In the late nineties they stopped the policy of going through and issuing contracts for water main replacements. It got to be where we wouldn’t fix them until they broke. We had a job—a main break—at Harper and Moross on the eastside. Every time we repaired it, cut out a section, put on a clamp and turned it back on, it would break again further in.

“In the nineties we stopped the program of replacing projects in-house and virtually everything started getting farmed out to the contractors. Every day, I’d see private contractors coming and making 20-30 percent more than city workers. Now the water has been running from a broken main for six days because the DWSD doesn’t have the personnel anymore. On top of that, a couple of weeks ago they said they’re going to lay off 600 more DWSD workers. So what are they going to do? They’re going to give it all to contractors.”