In response to Environmental Protection Agency regulations, the Portland  [OR] Water District is treating the water that it supplies to the Greater Portland area for cryptosporidium, a microscopic parasite that typically derives from animal waste and can cause severe gastrointestinal illness.

Beating a federally imposed deadline of April 1, the district has been operating two 14-foot, 84-lamp ultraviolet units for the past several months. The devices sterilize any cryptosporidium pathogens that may pass through, according to Joel Anderson, the chief operator of the Sebago Lake Water Treatment Facility.

“When UV attacks (pathogen) DNA, it actually breaks those cells and short-circuits them, and then renders them incapable of replicating,” said Anderson. “One cell in your system is not going to make you sick. When it gets into your system and begins to multiply is when you run into problems.”

According to Anderson, the district completed two years of monthly testing and never detected any cryptosporidium organisms in the water. 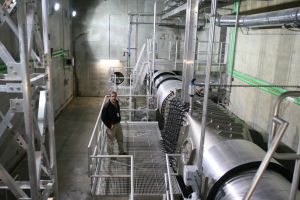 Joel Anderson, chief operator of the Sebago Lake Water Treatment Facility, said that one of the benefits of a new UV treatment system is that it does not add any new chemicals to the water supply. The average 21.5 million gallons of water that travel through the water treatment facility every day are treated with zinc orthophosphate, sodium hydroxide, sodium hypochlorite, aqua ammonia and hydroflourosilicic acid.

“The good news is Portland Water District is of very low susceptibility to it,” Anderson said. “We don’t have a lot of farmland in our watershed. We have a natural filtration system that takes place at Sebago Lake.”

In 1993, a cryptosporidium outbreak in Milwaukee’s drinking water supply system made 400,000 people ill, and killed more than 100 people. In response, the Environmental Protection Agency began to draft the Long Term 2 Enhanced Surface Water Treatment Rule, which was adopted in 2006. The rule requires public water systems that use surface water to treat for cryptosporidium.

The average 21.5 million gallons of water that travel through the water treatment facility every day are treated with zinc orthophosphate, sodium hydroxide, sodium hypochlorite, aqua ammonia and hydroflourosilicic acid. Anderson said that one of the benefits of the UV treatment is that it does not add any other chemicals to the water supply.

The facility’s ozone disinfection system, which kills viruses and giardia parasites, was also updated during the 17-month, $12 million project. The district received a $300,000 grant from Efficiency Maine to complete the project, and expects to save $150,000 on annual electric costs as a result of the upgrades. The program was primarily funded through the state Department of Health and Human Services’ Drinking Water State Revolving Fund.

According to the Centers for Disease Control, cryptosporidium can lead to stomach pain, dehydration, nausea, vomiting, fever and weight loss. It generally affects the small intestine, and can cause people with weak immune systems to succumb to chronic or fatal illnesses. Symptoms tend to set in two to 10 days after infection.

Michelle Clements, the water district’s spokeswoman, said that the improvements provide an additional safeguard to protect the quality of Greater Portland’s water supply.

“The project has added an additional barrier to potential contamination for our customers,” she said. “It’s just another way we provide safe, clean drinking water to our customers.”