The onset of flu season brings with it a rise in the use of antibacterial hand soaps. Many such soaps contain triclosan – a chemical that studies have shown affects the function of heart muscle and has been implicated in altering thyroid function in lab animal studies.

Scientists studying the chemical feel it is not necessary in keeping hands free from bacteria. 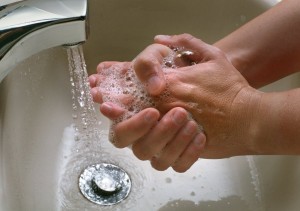 The chemical has been the focus of research at UC Davis for the last eight years. The most recent study was one of the first to find that mice exposed to high levels of the chemical showed impairment in the contraction and relaxation of heart and skeletal muscle.

Triclosan – introduced in 1969 as a pesticide – was first used as an antiseptic in 1972. Initially used in surgical scrub soap, it is now widely used in popular antibacterial soaps, such as Dial, and other consumer products, such as toothpaste and cosmetics.

A recent UC Davis study showed that triclosan impairs the electronic function of both cardiac and skeletal muscle of mice. That study was co-authored by Isaac Pessah, professor of molecular biosciences at UC Davis, and one of the lead researchers on the study.

“The impairments observed in muscle cell preparations were measured at triclosan levels that have been shown to occur in highly exposed individuals,” said Pessah.

That finding, Pessah said, is important given the growing presence of triclosan in products and in the environment.

“The levels of triclosan found in biological tissues of humans and fish have been steadily rising. More than 70 percent of Americans have detectable levels,” Pessah said. He said that almost half of those with detectable levels should be concerned by the outcome of his study because they likely have, or are at risk of developing, conditions that weaken their skeletal or cardiac muscle.

The federal Centers for Disease Control and Prevention – in a recent national report on human exposure to environmental chemicals – found a 50 percent increase in levels of triclosan across all demographics in the U.S. That study found that affluent individuals, and those over the age of 20, have the highest concentrations of triclosan.

“Triclosan is a clear-cut case of the potential hazards of using it in so many products,” said Pessah. “Triclosan has been documented to promote bacterial resistance, a global problem that has reached critical proportions, sufficient for the CDC to issue bulletins about the hazards of microbial resistance.”

Opting out of antibacterial soaps with triclosan may be a good idea, especially for individuals who have heart disease, said Bruce Hammock, director of the National Institute of Environmental Health Sciences Superfund program at UC Davis.

Hammock has been studying the chemical for the last six years. Triclosan first came to his attention when he realized that it was being found in high levels downstream from area sewage-treatment plants. “That was a surprise to me,” said Hammock. “The chemical was found in the environment at higher levels than predicted. It’s a high-volume chemical.”

Those high rates means triclosan use needs to be reassessed, Hammock said.

“Soap itself is very toxic to bacteria, and the abrasion of washing your hands with water and soap really does get rid of viruses and bacteria,” Hammock said. “So I don’t understand why the average person needs an anti-microbial added to soap.”

Brian Sansoni, a spokesman for the American Cleaning Institute, which represents the makers and suppliers of hygiene and cleaning products, disagrees with Hammock.

“Antibacterial soaps do provide a public health benefit, by reducing or eliminating pathogenic bacteria on the skin to a significantly greater degree than plain soap and water,” Sansoni said. “The bacterial reduction from hand-washing is linked to reduced infection from pathogenic bacteria.”

Triclosan is now finding its way into paper towels and many cosmetics. It’s also used in Colgate’s Total toothpaste, to fight gingivitis. Studies have shown the chemical particularly effective for this purpose.

“I think this is an example of small-volume use with a high benefit.” said Hammock, who said he uses the Colgate product. “I think the benefit here outweighs the risk – until something else comes along that’s better. I wish there were a warning label.”

Triclosan is under review by the U.S. Food and Drug Administration. The FDA is in litigation with the Natural Resources Defense Council, which wants the agency to make a long-awaited ruling on triclosan.

The FDA has said that it would be issuing a final set of regulations concerning antibacterial hand soap products and triclosan by the end of this year. However, Mae Wu, lead attorney for NRDC’s litigation with the FDA, is not holding her breath.

“The agency has been mulling a ruling on the products for the last 40 years,” Wu said.

She believes the agency has dragged its feet because of industry pressure. “Triclosan is part of a huge industry where billions of dollars are now being spent on these antibacterial soap products,” she said. “A lot of companies rely on these products for their profits.”

The FDA chose not to comment for this article because of the lawsuit with the NRDC.

Wu said another problem would arise if the FDA rules against the use of triclosan.

“There is a problem with the chemicals these companies are using to replacing triclosan,” she said.

Wu was referring to benzalkonium chloride. “That is another chemical the FDA is looking at that may also have some issues as far as human health effects,” she said.

Meanwhile, evidence continues to mount on triclosan and its risks for humans and the environment.

A recent study made a link between low-dose exposure to triclosan and endocrine disruption in the North American bullfrog. Another study found that the presence of triclosan proved deadly to algae and bacteria in low-flow Mediterranean streams where chemicals don’t get diluted readily. That study is especially important to the Central Valley, where many streams and creeks may have similar properties.

Evidence of the risks have not gone unnoticed. Earlier this year, the state of Minnesota banned the use of products with triclosan for use in its state buildings. Some companies – such as Unilever – have phased out the chemical’s use in Europe. Others – like Procter and Gamble – have said they intend to phase out the chemical in their products by 2014.