Tons of Dead Fish in Lake in China

Over 7 Tons of Dead Fish Found in South China Lake 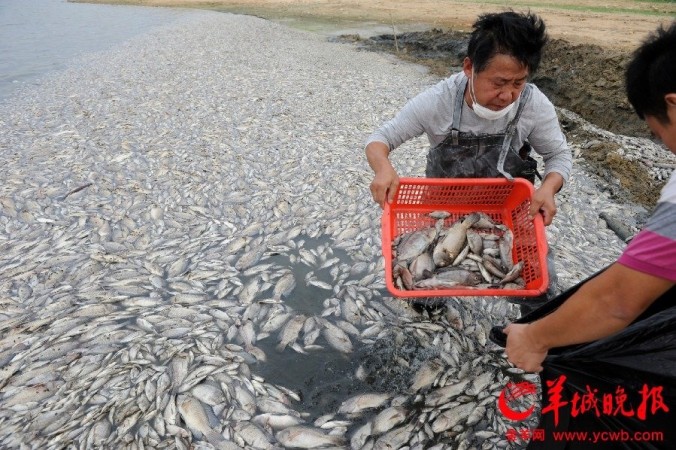 Thousands of fish have died in a lake in Guangdong Province since late October, probably due to pollution from sewage and industrial wastewater.

The die-off took place in Minghu City Park in the city of Shenzhen. A reporter with the Yangcheng Evening News visited the site, and could smell the stench from over 500 yards away, making him feel dizzy and vomit after spending some time there.

The lake was a dark yellow color with flies buzzing everywhere, according to Yangcheng Evening News. Some of the fish were already rotten and maggot-ridden; others were being eaten by cats and birds.

A sanitation worker told the reporter that it has not rained in Shenzhen recently to replenish the lake, and the only other water that enters it is polluted.

The man was part of a small group of workers removing dead fish from the vicinity of the outlet pipe, where the dirty water was draining into the lake.

“It’s too smelly,” one man said, adding that wearing a mask was not helping at all. “I couldn’t even swallow my lunch, and just felt sick. There are at least 7.5 tons of dead fish here.”

A local called Mr. Wu told the reporter that the water used to be clean, and many people used to visit there, and even catch fish.

“Since the 20th of last month, the water level dropped and the lake became very smelly,” Mr. Wu said. “At first, there weren’t that many dead fish, but after a few days, thousands floated to the top. They’re trying to clear it up, but there are just too many.”

There are several plastic factories in the area, and also some farms. The discharge water from these businesses flows into a spillway that drains into the lake, according to the reporter.

Further investigation revealed that about 800,000 tons of water were drained out of a nearby reservoir to make repairs near the base. The concurrent reduction in the lake water level may have contributed to the fish die-off.