“Toilet to Tap” Recycling in California 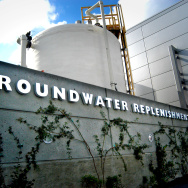 One way state officials hope to make California better able to withstand the ongoing drought is to stock underground drinking water supplies with recycled wastewater. Water managers across the state could learn a thing from the Orange County Water District: It was an early adopter of recycled water. And now, the district is expanding its use of what some call “toilet to tap.”

But calling it “toilet to tap” isn’t fair. The recycled sewage water makes quite a journey on its path to purification before it comes out of faucets at home. About 2.4 million Orange County residents get their water from a massive underground aquifer, which, since 2008, has been steadily recharged with billions of gallons of purified wastewater.

But, that toilet to tap moniker hangs around. So, we decided to put the Orange County tap water to a blind taste test.

The “yuk factor” associated with the phrase “toilet to tap” had doomed a similar proposal years earlier in San Diego. (The city of San Diego now has a pilot project underway). Orange County Water District officials avoided that fate with a massive public relations campaign that involved more than 2,000 community presentations.

“Most of my neighbors, we talked about it,” said Hart, who lived in Huntington Beach at that time.  “If they [OCWD] could do it and do it right and make sure that it’s proper, then it’s probably a good deal.”

Recycled water’s been such a good deal for Orange County, the water district is spending $140 million to expand its capacity to purify wastewater by 30 percent.

It starts in Fountain Valley where the water district operates a 24-acre facility that takes sewage fom the sanitation plant next door and converts it into millions of gallons a day of pure H2O.

First, to filter out bacteria, particles and protozoa, the sewer water is forced by air pressure through a series of microfibers, straw-like plastic membranes, with holes so tiny you can’t see them with the naked eye. The next stop is a pump station.

Wehner said the pump station is “where the water that’s been vacuumed through those hollow fibers is basically accumulated in a tank and transferred over to the reverse osmosis facility.”

Wehner said reverse osmosis or “R-O” is the heart of the largest potable reuse facility in the world. The water is pushed through plastic R-O membranes that remove nearly everything that isn’t H2O. The R-O process removes dissolved chemicals, pharmaceuticals and viruses.

The last step is to add peroxide (H2O2) to the water before it is sent through pipes where it is exposed to ultraviolet light that “kills anything that’s alive,” Wehner said.  The end result is distilled water.

“It’s actually purer than any other source of water that we have to put into our groundwater basin,” he said.

The water is then shipped northeast through a 14-mile pipe where it feeds a series of recharge basins, which resemble small lakes.

“It percolates through the native soils here at a very high rate up to 14 feet a day,” said Bill Hunt, OCWD executive director of operations, as he showed us where the purified water fills a recharge basin. “We’re putting a lot of water in the ground here. It goes into the ground here in Anaheim, which is sort of the upper end of the (350 square mile) aquifer system. It creates a mound of water underground and it pressurizes the aquifers throughout the county.”

The water is so blue it looks like glacial snowmelt.

“Our Caribbean water,” is what Hunt calls it.

The OC Water District says 1.3 billion gallons of treated wastewater flows through Southern California sewers into the Pacific Ocean every day.  The water district takes some of that water from the Santa Ana river and diverts it to a recharge basin.

While other counties, and even the portion of south Orange County not served by the OCWD, rely heavily on imported water from Northern California and the Colorado River, the district’s Groundwater Replenishment System combined with the aquifer, provide 70 percent of the supply.

So why aren’t more counties moving to ‘tap the toilet?’

The OC Water District’s Wehner says public acceptance and political support are the main obstacles. He also pointed out that there are groundwater resources in Los Angeles County that remain untapped.

“Population growth is too great, the traditional sources are being depleted, so there really is no choice,” said Famiglietti. “We need to invest in projects like sewage recycling in a lot more places then we’re currently doing it.”

As for the “yuk factor” of the old toilet to tap objections, Famiglietti has this simple advice: “get over it.”

Meantime, the Orange County Water District has a $142 million expansion project underway at the Fountain Valley reuse facility. By the end of 2015, OCWD officials say the plant will be producing 100 million gallons of potable water a day – at half the cost of imported water.