Caution: Do Not Read These Out Loud to Your Children

Tiger Tom’s great series of dog fables, designed to reveal and reflect on the mental and moral shortcomings of man’s best friend.

The Little Girl and the Dog

Once a little girl was on her way to visit her grandmother. She had to pass through a bad neighborhood, where she saw a spotted dog with long ears and a big slobbery tongue lapping up somebody’s garbage. . The dog asked, “Are you taking that bag of goodies to your grandma?”

When the little girl got to Grandma’s, she got the key from under the flower pot, let herself in, and headed for Grandma’s bedroom. Thirty feet from the bed she caught on that it wasn’t her grandma in bed but the same big, ugly spotted dog with a slobbery tongue and a stupid expression that she had seen gulping garbage.

Not being a nitwit, the little girl said: “Grandma, I have to pee pee then I have some goodies for you.” She stepped into the bathroom, took a cell phone from her goodies basket and called 911. While she was waiting for help, she engaged Spot in a long, pointless conversation about the size of his teeth and his ears and his tongue. By the time Animal Control arrived, the slow-witted canine believed that he was really the little girl’s grandmother. He tried to tell them they were making a big mistake as they hauled him off to the kennel of no return.

As soon as Spot was gone, the little girl’s grandma returned from the mall. The little girl helped her strip the bed, deodorize the room, and spray for fleas. Then they sat down to some cookies and soy milk and had a good long laugh about how stupid dogs are.

The Moral: Dogs aren’t as good as wolves at fooling little girls and their grandmas.

A Short Tale with a Happy Ending

Three dogs lived in a modest one-room doghouse behind the Big House. One day when the Powers That Be brought the dogs their food, Father Dog, a big, ugly palooka who thought he knew everything, said with pompous authority: “This food is too fresh. Let’s go out and do some dog stuff, then we’ll come back and fight over the food later.”

When he got to the food bowl, however, he saw right away that some of the food was gone. In fact, a small generic animal was helping himself to it. Father Dog was so enraged that he did not wait for the usual “someone’s been eating my food” repartee but rather charged full speed, growling, snarling, and slobbering, in pursuit of the tiny thief. Just as Father Dog attained full speed and was closing in for the kill, the small animal slipped easily through the cyclone fence and was gone.

Father Dog was going much too fast to stop. Although he locked his brakes and clawed at the ground, he crashed hard into the fence and burst immediately into flames. Soon there was nothing left but a bad smell and a big pile of smoking flesh.

The Fancy Dog Who Learned to Heal 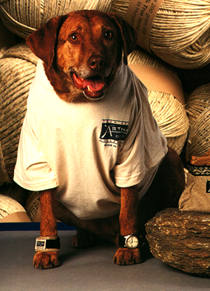 His  condition was at first misdiagnosed as a simple case of the Three Day Mange. But  when he did not respond to the usual scrubbing and scalding therapy, the dog doctor recommended an emergency thyroid transplant.

Unfortunately,  no thyroid donor was available. While he was in the dog hospital waiting for a donor, Bowser, for that was our hero’s name,  was enrolled in the dog hospital’s special “Get A Life” therapy training courses. This program was offered to improve his job skills and, of course, to get more of the owner’s money.

When he had  “Shake” and “Roll Over” down pretty good,  on his twelfth day in the dog hospital,  the trainer came in, raised his hand over his head,  and  introduced a new command.  “Heel!”  he shouted.

As if by magic, the big globs of white stuff left Bowser’s eyes, hair started growing in the places where it’s supposed to, and he suddenly smelt no worse than most other dogs. In spite of the dog doctor’s protests and dire predictions of  death and worse, Bowser left the hospital with his original thyroid intact. Soon, he was back to being his normal pompous , greedy and slobbery self.

The Moral:  Be careful what you say to dogs. They are lousy spellers.

The Wolf and the Dog

I, Tiger Tom,  confess that I snatched this tale from the great Spanish fable writer Félix María de Samaniego,  who picked it up from someone else and wrote it down  over twenty decades ago. Samaniego wrote it in fancy 18th century Spanish poetry, but I am changing it to very simple English so that even Americans can understand it.  I, Tiger Tom, like this story because it sheds light on how dogs got to be the jerks they are today.

A skinny, hungry wolf was out prowling for food one morning when he came upon a plump dog at the edge of town.

“Señor Dog,” said the bony wolf, “I can’t help but marvel at how good you look, while I, who run looking for food day and night, am a picture of Death itself.”

The dog got right to the point. “Señor Wolf, it could be that you are in the wrong profession. Perhaps you should follow my example.  Give up all this roving about and sleeping in caves.  Move to town. Find a rich family and get you a good watchdog job.  Watchdoggery is a noble calling.  You just keep an eye on things, suck up to the people, act like a moron,  and the  good stuff in life rolls your way.”

The wolf didn’t think twice. He vowed at once to give up his hungry lifestyle and move to town. So the two compadres walked along and chatted amicably until the wolf started asking some personal questions.

“Señor Dog,” he said. “I’ve been wondering about that ring around your neck where all the hair seems to be worn away. What, pray tell, is that?”

The dog evaded the question, so the wolf asked again. The dog said, “Oh, that’s nothing.  Just the mark of the chain” 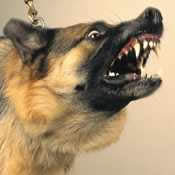 “Yes. It’s no big deal. They put it on me to make sure I stay on the job and don’t go wandering around.  But they let me off at meal time and treat me like a king.  Anything they don’t want to eat they throw right on the floor for me. Stuff like bones when the meat is gone, stale bread, and sometimes even a big glob of fat that was accidentally burned by the cook.  It’s great!  Sometimes they rub their hands around on my back and all I have to do is act like I like it, keep my mouth shut, and wag my tail.”

“All that is fine,” said the wolf, “but it sounds to me that being a watchdog is a lot like being a prisoner.”

“In fact,” said the wolf, moving to center stage and adopting the tone and posture of an 18th century neo-classical poet,

on bread crusts and mutton,

I’ll stick to my cave