The Water Footprint of Espionage

A Server, A Spy, and a Water Footprint

In a Nutshell:  Few are aware what a water-intensive business spying is. It takes water, lots of water, to quench the thirst of the big computers that listen to millions of millions of phone calls every day.

Here’s another angle to the NSA citizen-spying story you may have not considered—the amount of resources devoted to this mass surveillance project. In order to keep tabs on all those website visits, e-mails, and Google searches, the NSA needs data centers packed with servers.

Lots and lots of servers…

And while racks and racks of computer processors require a lot of energy, the water-demand component cannot be ignored.

So how much is the NSA’s water footprint? As reported online by the website Geek, the NSA’s latest facility—set to open in September near Bluffdale, UT, “will require as much as 1.7 million gallons of water each day.” 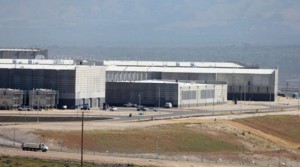 Spying takes lots of water. In this case, 1.7 million gallons per day.

The facility, christened the Intelligence Community Comprehensive National Cybersecurity Initiative Data Center (now that’s a mouthful!), is a “1–1.5 million square foot facility with about 100,000 square feet devoted to data storage.” And while the NSA will only admit that the data being collected is classified, Geek’s Ryan Whitwam believes “the data center will be processing the contents of electronic communications including phone calls, e-mails, and Internet searches.”

“Basically, it probably has something to do with PRISM,” he writes.

Regardless of the motives behind the data center’s information processing capacity, this newest NSA facility has a water footprint that would make most suburban neighborhoods jealous: its millions of gallons in cooling water roughly equivalent to the water usage of several thousand average American households. While up to one third of the data center’s cooling water can be reused for irrigation, the city of Bluffdale anticipates that up to 1% of the region’s water supply will be used by this new data center.