The Tragic Disappearance of the Aral Sea

Satellite photos show how the depredations of dictators have turned the world’s fourth largest inland sea into a poisonous desert. 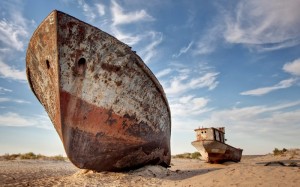 The vanishing sea is a warning: a harbinger of the long feared war over water in Central Asia.

MOSCOW, Russia — Photographs that NASA released this week show the graphic chronicle of a natural disaster in Central Asia’s Kyzylkum Desert. The images from the Terra satellite feature the patches of water remaining in the disappearing Aral Sea, which was once the fourth largest inland sea in the world. They look dark green in 2001, light green in 2005, as the sea grew shallower, and this year they are all but gone.  The seawater once covering 26,000 square miles vanishes into desert.In fact the vanishing sea is a warning: a harbinger of the long feared war over water in Central Asia.

If the pictures are new, the news of the Aral Sea shrinking is old. The story goes back to a Soviet desire to create a new breadbasket, far from southern Russia and Ukraine and possible Western invasion, where, indeed, war rages today.

The giant irrigation projects began in the 1960s in the dry lands of Uzbekistan and Turkmenistan. To irrigate cotton fields in Central Asia, Soviet workers built 45 dams diverting the twin rivers of Central Asia’s “little Mesopotamia,” the Amu Darya and Syr Darya, into the so-called “virgin lands.” By the late 1990s the sea level dropped by 16 meters, leaving fishing boats and ships resting on the sandy and salty bottom.

As a result, disaster struck dozens of villages and small towns. In vain, fishermen waited for the sea to come back: there were no fish, there was no money for their families. The wind blew dry, salty air from the former seabed far to the south and east. The air mixed with fertilizers and pesticides that for decades were washed from the fields into the sea by irrigation water. The noxious winds poisoned the local population.

The final chapter began in 2005, when the World Bank gave Kazakhstan the first $68 million credit to build a 13-kilometer-long dam to split the Aral Sea into halves: the Northern Aral Sea in Kazakhstan and the Southern Aral Sea in Uzbekistan. The dam prevented water from Kazakhstan’s Syr Darya from flowing into Uzbekistan’s half of the sea.

By 2008, Kazakhstan had managed to completely take control over the Syr Darya water, reviving 68 percent of the northern sea, reducing the salinity by half, and once again developing the fishing industry.

On the southern, Uzbek side, however, the sea dried up that much faster. Uzbekistan, largely dependent on cotton, the industry of white gold, could not afford to re-channel water to its half. Also, with the water vanishing, the Russian oil company Lukoil found a silver lining in the disaster, setting out in 2006 to explore for oil and gas on the bottom of the Aral Sea in the Uzbek sector.

In the last couple of years, neighboring Central Asian countries have had tense disputes about their water, which is so vital to their prosperity.

The construction of a hydroelectric power plant in Kyrgyzstan, which has border skirmishes from time to time with Uzbekistan, threatened the future independence of cotton farmers there. Each year their fields need at least 53 billion cubic meters of water for irrigation. Once, in 2013, Kyrgyzstan halted water for its reservoirs, and at least 11 regions of Uzbekistan suffered shortages.

In the past decade both Russian and Western ecologists expressed concerns about the worsening environment for millions of local people exposed to the salty wind. But that is not the only risk posed by the ghost of this vanishing sea.

An abandoned Soviet military base sits on Renaissance, or Vozrozhdenie, island, and was a test site for the Soviet biological weapons program. Rumors persist that the weapons were buried there. Where better to test cultures of anthrax, typhoid, plague and tularemia than on an island in a sea in the middle of the desert? No longer on an island, the site is now left exposed to anybody willing to walk across the drying sands.