The Mysteries of MIP and FIP

The Basics of Compression and Pipe Threads Used in Water Filters

Like most professions, the water treatment industry runs on initials. Here are a few more.

There is often confusion about the threads on the fittings and connectors used in water treatment in particular and small-pipe plumbing in general. Things used to be more complicated when undersink plumbing had such exotic creatures as flare, fine flare, and Texas fine flare fittings to contend with.  Now almost everything is done with compression fittings, pipe fittings, or the super convenient plastic push-in fittings.

The push-ins are easy. With threaded fittings,  what confuses people usually is the distinction between a pipe fitting and a compression fitting. The picture below has both threads. It’s hard to see the difference, but there is a difference. 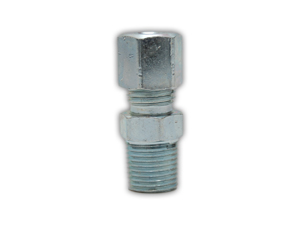 The real confusion with pipe fittings comes from the fact that they have so many different descriptive names.

MIP stands for Male Iron Pipe, or some would say Male International Pipe. The same pipe size can also be called MPT, for Male Pipe Thread.

To add confusion, there is NPT, which stands for National Pipe Thread.  The Wikipedia makes this  as confusing as possible:

Sometimes NPT threads are referred to as MPT (‘Male Pipe Thread’), MNPT, or NPT(M) for male (external) threads; and FPT (‘Female Pipe Thread’), FNPT, or NPT(F) for female (internal) threads. An equivalent designation is MIP (Male iron pipe) and FIP (Female iron pipe). Also the terms NPS and NPSM are sometimes used to designate a straight, not tapered, thread. (This should not be confused with NPS meaning Nominal Pipe Size.) 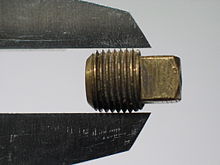 The gentle taper of the pipe threads can be seen when it is viewed in the calipers.

I won’t bore you with the actual taper of pipe thread patterns. The main thing you need to know when dealing with water treatment equipment is that compression caps won’t work on pipe threads and you can’t screw male compression thread into a female fitting (like a filter housing port) that’s made for pipe.