The Mediterranean Has Become A Sea of Plastic

People are swimming in a plastic sea 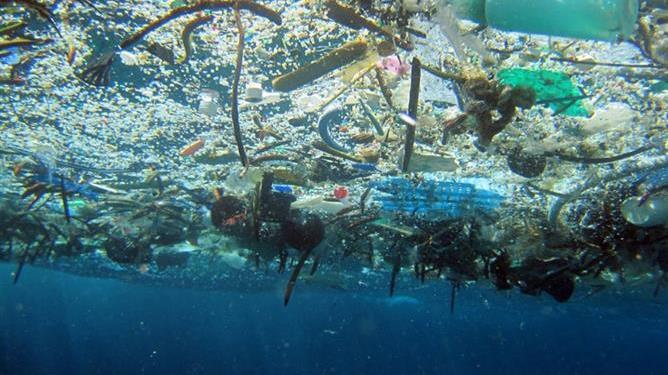 No part of the Mediterranean Sea is immune to plastic pollution, and area to the east of Malta hosts a particularly high concentration of such debris, a research expedition has discovered.

The research expedition, Tara Méditerranée, is the tenth expedition being organised by French non-profit organisation Tara Expeditions, which was established in 2003 by fashion designer agnès b and her son Étienne Bourgois. The expeditions are carried out through the non-profit’s schooner – the Tara.

The seven-month expedition, which began in May and which is being carried out under the patronage of the EU’s Environment Commissioner Janez Potočnik, aims to carry out a scientific study concerning plastic pollution, as well as promote awareness of environmental challenges in the Mediterranean region.

The Tara arrived in Malta on Thursday and set sail once more yesterday, a visit which helped fulfil the expedition’s educational aims though an exhibition called “Our Ocean Planet” in St George’s Square, Valletta, the screening of the documentary Planet Ocean and press briefings.

In comments to The Malta Independent, the expedition’s scientific director Gabriel Gorsky – the head of the Oceanology Observatory of Villefranche-sur-Mer, which is part of the Paris-based Pierre-et-Marie Curie University – explained that as the Tara sails around the Mediterranean, the scientists on board are quantifying the plastic fragments they come across, measuring their size and weight and identifying the types of plastic found at sea.

Dr Gorsky added that the team is also analysing the organic pollutants which adhere to these plastic fragments, as well as the microorganisms which colonise them.

Plastic in your plate

The development and spread of plastics may have transformed society, but it has also had a significant effect on the world’s seas, accounting for the vast majority of marine debris.

The most obvious effect is the accumulation of waste along the coast, but the effect of plastic waste is far more wide-ranging than the creation of an unsightly nuisance.

Most plastics do not readily biodegrade: their slow degradation is typically the result of exposure to sunlight. But this process, which breaks down plastic waste into smaller and smaller fragments over the years, may only make the matter worse.

The breaking down of plastic material can lead to the leaching of toxic chemicals which have been used in its manufacture.

Threats to marine life include the potential of poisoning, but also the risk being harmed or killed through entanglement in plastic waste or through the accidental ingestion of debris, which can lead to starvation due to a blocked digestive tract.

That marine creatures such as turtles end up swallowing plastic is well known, but another reality is the consumption of small particles by filter-feeding creatures such as barnacles and various tiny organisms, a process which can lead to plastics making their way up the food chain.

Research on what happens to plastic debris and its effect on marine ecosystems – including their possible future impact on the oceans and on humans alike – is still lacking, and the Tara Méditerranée expedition is striving to help fill this gap.

The probable entry of plastic fragments – and all the pollutants and microorganisms they may be carrying – into the food chain is also a subject that has been virtually unexplored, and according to Dr Gorsky, the risk of such plastic waste contaminating seafood is all too real.

“We are looking at how the plastic may cause bioaccumulation in your plate,” he explained.

The risk of bioaccumulation of mercury in seafood is already well known: pregnant women, in particular, are often advised to limit their consumption of certain fish such as tuna. Whether plastic contamination may present a similar threat in the future remains to be seen.

Asked to state what the findings of the expedition have been so far, Dr Gorsky explained that what is being collected at present will need to be analysed once the expedition is over in an appropriate laboratory. But one particular fact is already clear.

“There is not one parcel of the Mediterranean Sea that is devoid of plastic or plastic fragments… they are everywhere,” he maintained.

Dr Gorsky added that Malta is not only not an exception to the rule, but revealed that the ship has encountered very high concentrations of plastic waste to the east of the country, although their extent will only be properly quantified once tests are carried out.

“However, there is a general problem, not just related to Malta,” he emphasised.

The Mediterranean may only account for 0.8% of the ocean surface, but it hosts close to 8% of global marine biodiversity. Around 450 million people live along its coast, and almost 30% of the world’s maritime traffic is concentrated in the Mediterranean; factors which contribute to the increasing presence of plastics and other pollutants.

Tara Expeditions argues that it is urgent to find concrete solutions to the problem, noting that many of the solutions – including water treatment, waste management, biodegradable plastics, promoting sustainable tourism and creating Marine Protected Areas – have been proposed decades ago by the Barcelona Convention for Protection against Pollution in the Mediterranean Sea, the UN Convention on Biological Diversity and the EU itself.

“People must be aware that they are swimming in a ‘plastic sea’, and that this plastic hosts harmful pollutants and organisms,” Dr Gorsky maintained.

“Everyone must contribute to decrease the amount of plastic waste.”