Gray Whales Habitat in Baja, Mexico Is Alive Though Threatened

Laguna San Ignacio in Baja, Mexico is a tranquil lagoon where mother gray whales travel each year from thousands of miles away in Alaska to give birth to their babies without human disturbance.  It is, in fact, the last gray whale sanctuary on earth.

The environmental group, NRDC, the Natural Resources Defense Council, has gone to great lengths to protect it.  In 2000, NRDC stopped Mitsubishi from building a saltworks plant that would have turned the shores of the lagoon into an industrial wasteland. But still today, the lagoon is perennially threatened by schemes for industrialization and development that would destroy the whales’  home.

NRDC is currently working with local and international partners to permanently protect 500,000 acres around the lagoon to ensure that it will be kept pristine for the gray whales.  Recently, the Mexican government  granted special protection to an additional 199,000 acres of land surrounding the lagoon. 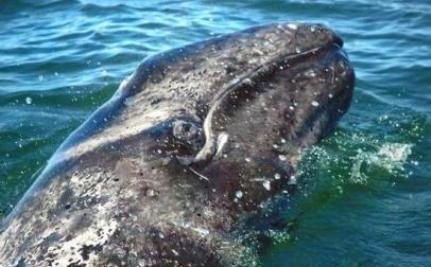 The gray whale is one of the world’s greatest migrators.   They travel in  groups called pods.  Some swim 12,000 miles round-trip from their summer home in Alaskan waters to the warmer waters off the Mexican coast. The whales winter and breed in the shallow southern waters and balmier climate. Other gray whales live in the seas near Korea.

Gray whales were once the target of extensive hunting, and by early in the 20th century they were in serious danger of extinction, but today they  are protected by international law, and their numbers have grown. In 1994, the gray whale was removed from the United States endangered species list.