The First Fatality in the Las Vegas Tunnel Project

Ninety percent of Las Vegas water currently comes from Lake Mead, which has shrunk in recent years due to ongoing drought and increasing 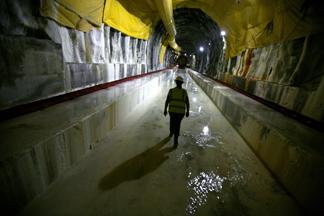 One of the ways Las Vegas is working on to provide itself water is an impossibly difficult $187 million five-year engineering nightmare that involves tunneling for 3 miles 600 feet beneath the bed of nearby Lake Mead to create a channel that will eventually draw water from the very bottom of  the dwindling lake.  Some say that the project is as challenging as the building of Hoover Dam itself.

Lake Mead’s surface level has dropped about 100 feet in elevation since the lake was full in 2000. At current usage rates it will soon be dry.  It is about half-full today, but Las Vegas plans to keep pumping its water as long as a drop remains.

In June of 2012, project worker Thomas Albert Turner, 44,  died of an accident in the tunnel.

Go here for the full story.