The Environmental Consequences of Having a Clean Car

In the Case of Automobiles, Cleanliness Is Not Next to Greenliness

A woman I know always tells critics of her dirty truck that she values  the vehicle so highly that she only allows God to wash it. I’ve used her line a few times myself and I can say with accuracy that a month of Sundays, at least, is my regular truck washing interval.  Imagine my satisfaction, then, when I came across the article below in Stormwater.  While the author, Editor Janice Kaspersen, stops short of actually endorsing abstention from vehicle scrubbing, she does make it clear that when you give the kids from the church $20 for bathing your Chevy in the parking lot, you really don’t deserve a pat on the back. –Gene Franks.

Stormwater professionals have long acknowledged the water-quality problems associated with car washing, not only with centralized car washing services that direct water to the storm drains, but also with individuals who wash their own cars in their driveways or in the street. In both cases—unless the car wash either recycles the water or directs it to the sanitary sewer, and unless the person washing a car in the driveway has some means to capture the water—the detergent and whatever else comes off the car goes straight to the storm drain.

But nothing, perhaps, makes stormwater managers cringe as much as local fundraising car washes, which seem to take place on just about every sunny weekend—high school sports teams, band members, scout troops, or local charities raising money by washing dozens of vehicles on a convenient vacant lot. 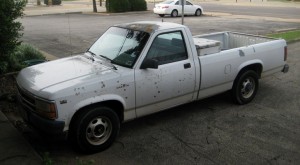 Studies have been done to quantify how much harm the practice might actually cause to surface waters, as in this study in the Puget Sound area. Some stormwater programs have encouraged fundraising groups to hold their events at a professional car wash instead, where the water is properly handled. In addition to keeping it out of the storm drain, studieshave estimated that a commercial car washes uses 60% less water than washing with a hose, in part because the pressure nozzles mix air with the water to create high pressure with less water volume.

Alternatively, many organizations and local governments provide home car-washing kits to local residents, including catch basin inserts to trap and divert the soapy water. The use of such kits has been especially encouraged for community fundraising car wash events. Prohibiting the fundraisers outright proved to be extremely unpopular, however.

The water-quality message finally seems to be getting through, though, at least in some places. Officials in Washington state say the traditional vacant-lot car wash is dying out. Three-quarters of people surveyed now say the practice should be discontinued. Fundraising groups are looking to alternatives, such as partnering with a professional car wash to offer car-washing coupons. And there’s even some evidence that people who do pay for their car to be washed by a local group are more likely to ask where the runoff goes—evidence that the public education message is actually getting through.