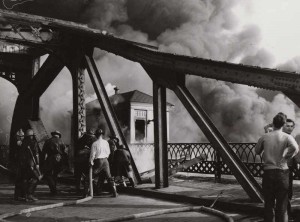 Cuyahoga River on fire in 1952.  This fire was the worst of the Cuyahoga fires. This picture and others created a demand for action.  (Click picture for a larger view.)

When water catches fire it gets people’s attention. We’ve all seen pictures recently of burning well water, laced with methane from hydraulic fracturing operations. So far, these spectacular displays have provoked only a timid “more studies are needed” response from environmental regulators. We may need a Cuyahoga River event to get the country’s attention.

The Cuyahoga River at Cleveland caught fire at least 13 times in the past two centuries.  The first recorded fire was in 1868. The “most fatal” was in 1912, when five people were killed. The final fire, 1969, although it wasn’t the biggest or the worst of the Cuyahoga fires, played a big part in the advancement of the environmental reforms of the 1970s and was even instrumental in the creation of the Clean Water Act.  The 1969 fire came at a time when the country was ready to listen.

All the Cuyahoga fires (the 1952 fire was the worst) were the result of numerous petroleum spills,  the dumping of fats and greases by slaugherhouses, acids from steel plants, and dyes from paint plants.  There were also a lot of picnic benches, screen doors, automobile tires, boxes, and other combustible debris washed into the river by rains.  Add to that much untreated human sewage from the Cleveland-Akron area, which may not have burned but certainly contributed to the stench.

Here is an account of the fires from a Cleveland historian. We’ve added the pictures and captions.–Hardly Waite.

The story of the Cuyahoga River fire of 1969 – the event that sparked pop songs, lit the imagination of an entire nation, and badly tarnished a city’s reputation – is built more on myths than reality. Yes, an oil slick on the Cuyahoga River – polluted from decades of industrial waste – caught fire on a Sunday morning in June 1969 near the Republic Steel mill, causing about $100,000 worth of damage to two railroad bridges. Initially the fire drew little attention, either locally or nationally. The ’69 fire was not even the first time that the river burned. Dating back to the beginning of the twentieth century, the river had caught fire on several other occasions. 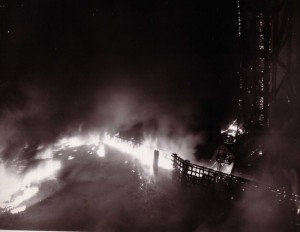 Photo of the 1948 Cuyahoga Fire.  (Click picture for a larger view.)

The picture of the Cuyahoga River on fire that ended up in Time Magazine a month later – a truly arresting image showing flames leaping up from the water, completely engulfing a ship – was actually from a much more serious fire in November 1952. No picture of the ’69 river fire is known to exist.

Throughout much of Cleveland’s history, water pollution did not trouble the city’s residents too much. Instead, water pollution was viewed as a necessary consequence of the industry that had brought the city prosperity. This attitude began to change in the 1960s as ideas associated with what would become known as environmentalism took shape. In 1968, Cleveland residents overwhelmingly passed a $100 million bond initiative to fund the Cuyahoga’s clean up. Also, by this time deindustrialization was somewhat alleviating the pollution problem, as factories closed or cut back operations. Ironically, the city and its residents were beginning to take responsibility for the cleanliness of the river in the years before the infamous fire of 1969. 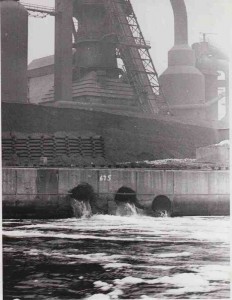 The ’69 fire, then, was not really the terrifying climax of decades of pollution, but rather the last gasp of an industrial river whose role was beginning to change. Nevertheless, Cleveland became a symbol of environmental degradation. The Time article contributed to this, as did the notoriety of Cleveland Mayor Carl Stokes. Stokes, who was the first black mayor of a major city when elected in 1968, became deeply involved with the issue, holding a press conference at the site of the fire the following day and testifying before Congress – including his brother US Representative Louis Stokes – to urge greater federal involvement in pollution control. The Stokes brothers’ advocacy played a part in the passage of the federal Clean Water Act of 1972. In Cleveland, a number Cleveland State University students celebrated the inaugural Earth Day in 1970 by marching from campus to the river to protest pollution.

Even though it has been misunderstood, the 1969 Cuyahoga River fire did help bring about positive change. The river’s water quality improved during the following decades, and business investors capitalized on this by converting parts of the Flats’ abandoned industrial landscape into an entertainment district featuring restaurants, nightclubs, and music venues.

Much of the industry that both made Cleveland rich and caused its river to burn may never be coming back, but Clevelanders are meeting this challenge by reshaping their city to reflect its current realities. 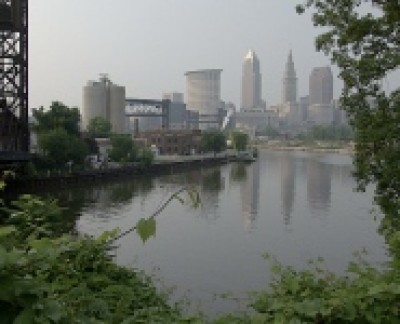