The Battle for Water: Agriculture vs. People

Stakes are high in ongoing battles for water

Gazette Introductory Note:  America’s agricultural system, designed with the primary goal of making money for agribusiness “farmers,” is highly water intensive.  The system works when there is abundant water to exploit, but, as we are learning, when water runs short, the system will not meet our needs. The question is, will be be able to convert to  more sustainable agricultural practices that are aimed at providing nutritious food for people rather than massive profits for banker-farmers? — Hardly Waite.

Even more to the point, while most of us might live a month or so without food, not one of us could live much more than a week without water.

Farming and ranching are in the same life raft; water is their key element and they use a lot. Nearly 80 percent of every drop, bucket and stock tank of water used in the United States every day is slurped and guzzled by American agriculture.

That’s 320 billion gallons every day of every week of every year. (Links to source material are posted at http://farmandfoodfile.com/in-the-news/.)

By contrast, American households collectively use less than a one-tenth, or 29 billion gallons, of agriculture’s thirsty total each day.

If you think that 10-to-1 ratio can or will continue, go to California. As that state’s years-long drought drags on with no end in sight, people — not cows or corn or cotton — are winning every fight for water, according to March 2014 data released by the California Farm Water Coalition. 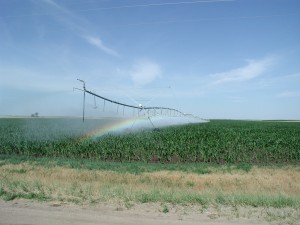 Corn, a high profit item for agribusiness “farmers,” is also a notorious water hog.   “87 percent of irrigated corn is grown in regions with high or extremely high water stress” and “over half of the country’s irrigated corn production — worth nearly $9 billion annually — depends on groundwater from the over-exploited High Plains aquifer.”

For example, this year, estimates the CFWC, 800,000 acres of California farmland will not be planted due to the lack of irrigation water. Last year that number was 500,000 acres. Next year, it guesses, the acreage will be even bigger.

A hard hint of a much smaller drought in the Midwest in 2012 sent U.S. corn prices to more than $8 per bushel, notes a detailed June 2014 report by Ceres, a nonprofit group that “mobilizes business and investor leadership on climate change, water scarcity and other sustainable challenges.”

But it wasn’t — and, if another drought strikes, won’t be — just corn farmers who were nailed, the report notes. “Investors,” it explains, “need to understand how companies in the grain processing, food, beverage, livestock, ethanol, grocery and restaurant sectors are addressing these risks.”

In short, while many farm organizations dismiss or discredit climate change as a government-sponsored plot to impose new regulations on farmers and ranchers, the multitrillion-dollar food, feed and fuel sectors that rely on U.S. farm and ranch output to generate product and profit do not see a bogeyman. To them and their shareholders, climate change is a serious threat that needs to be managed.

The Ceres report lays out the size of that threat to the U.S. corn sector. For example, “87 percent of irrigated corn is grown in regions with high or extremely high water stress” and “over half of the country’s irrigated corn production — worth nearly $9 billion annually — depends on groundwater from the over-exploited High Plains aquifer.”

Additionally, “36 ethanol refineries are located in and source corn (that is) irrigated” with that High Plains aquifer. It’s a big investment at big risk, suggests Ceres, which directs a group of more than 100 institutional investors whose collective assets top $13 trillion.

But that’s just the tip of the melting iceberg.

According to the Ceres report, “16 separate sectors” of the U.S. economy “depend on corn as a key ingredient.” Last year, “The top 45 companies in the corn value chain earned $1.7 trillion in revenue,” or more than “Australia’s annual GDP.”

Given those numbers for corn alone, consider the impact climate change will have across not just farming and ranching but the entire U.S. economy.

Or, as most American farm and ranch groups prefer, don’t. The really big, really smart money, however, already is.

Alan Guebert is an award-winning agricultural journalist whose work is published weekly in more than 70 newspapers in North America.