Thales and the Philosophy of Water 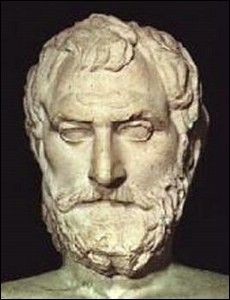 The early Greek philosopher Thales is best remembered for his system of metaphysics that was based on the belief that everything originated from water and that water was the main ingredient of everything. Many of his views helped lay the foundation of modern science. For example, Thales was the first person to predict a solar eclipse accurately, an accomplishment that impressed Isaac Asimov so much that he called it “the birth of science.”

Thales was a well known figure of his time. He was born around 685 BC. He left no writings, and what we know about him comes mainly from Aristotle. According to Aristotle, Thales believe that water is the origin of all things and the the world floats on water.

Thales became wealthy, not by selling water softeners but by using natural evidence to predict olive harvests and investing accordingly in olive oil futures. Other notable accomplishments were measuring the height of the great pyramid by measuring its shadow and discovering magnetism (which he offered as proof that all objects are alive).