The plans of a Texas company called GreenHunter Water are now on hold while federal authorities investigate the wisdom of hauling tens of thousands of gallons of toxic fracking brine to Ohio’s 179 disposal wells.

The US Coast Guard is delaying the project until a decision is made on the nature of fracking waste, which environmentalists contend is a toxic material that is too dangerous to transport by river barge. 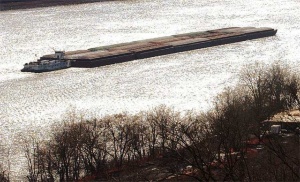 This giant brine barge can haul as much toxic waste as 1050 trucks. Environmentalists question the wisdom of allowing such massive waste dumps to lumber down America’s rivers.

Barges add a new wrinkle to the flood of waste fluids washing into Ohio from the thousands of natural-gas wells drilled into Pennsylvania’s Marcellus shale.

Drillers rely on fracking, a process in which millions of gallons of water, sand and chemicals are pumped underground to shatter the shale and free trapped gas. A similar fracking boom is under way in Ohio’s Utica shale.

Some of the fracking fluid bubbles back up, along with saltwater trapped underground for millions of years. The brine contains spent fracking chemicals, high concentrations of salt and naturally occurring metals and radium.

Millions of barrels of waste are injected back underground in Ohio disposal wells. State records show that 12.2 million barrels of fracking waste and brine were injected in the first half of 2012, 56 percent of which came from Pennsylvania and West Virginia.

Much of the brine comes in tanker trucks that can hold 80 to 150 barrels, [and] GreenHunter wants to use a tanker barge that can hold 10,000 barrels. The company’s website says the storage tanks at the New Matamoras terminal can hold as much as 70,000 barrels . . . .  One barge can haul as much as 1,050 trucks.

Environmental advocates question the safety of the practice and worry that a barge carrying brine could run into a bridge or another vessel and break apart. They point out that the Ohio River provides drinking water, and to endanger it by allowing the barge transportation of a hazardous waste is unwise.