We usually think of street sweepers as big noisy machines that stir up dust and pick up some dirt, leaving the street looking a 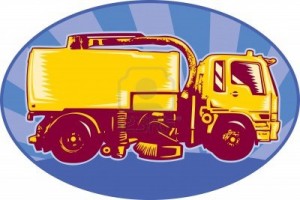 little nicer.  What we don’t consider is that street sweepers are an essential part of water treatment.

What we  call ‘street dirt’ is composed of heavy metals and other pollutants—items that may be killing fish when they get into waterways via stormwater runoff. Cities use media filters to clean stormwater, but it is estimated that effective street cleaning can greatly lessen the cost of filtering.  Cleaning the street as compared with filtering costs about one-forth as much, in fact.

Heavy metals like cadmium, copper, lead, zinc are specific pollutants that are found in abundance in “street dirt.”  In 1972, in the first USEPA publication ever on stormwater, street dirt was named as “the primary source of contamination, in terms of mass.”

Much of the toxic debris that washes to storm drains from the street is from automobiles.  Brake pads, for example, especially cheap brake pads, deposit large amounts of copper into the streets.  This copper ends up in the water supply unless it is caught in a filter or, more economically, swept up by a street cleaning machine.

Street sweeping machines vary in sophistication.  Early models, which go back centuries, were used for picking up horse manure before the advent of the automobile.  In the early 20th century, many US cities used them, but they were of limited effectiveness.

Mechanical machines, which use a main broom and conveyor belt to pick up material,  have been around at least 100 years. Their basic design hasn’t changed that much, although impressive improvements have been made, such as the broom design and speed, and the conveyor belt speed and alignment.  The mechanical machines are still the most popular, and perhaps 90% of the sweeping machines in operation are of the mechanical broom design. 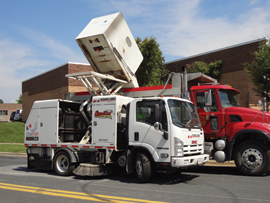 Most street sweepers are still of the mechanical broom design.

Newer designs include “regenerative air” units which in one motion blow air down on the pavement to dislodge debris then immediately vacuum the dirt into a hopper.  These are sometimes unpopular because unless they include air filters they stir up lots of dust.  Vacuum machines can be very effective.

Even more advanced designs use water.  One machine features “rotary arms with nozzles on the end that  blow water down on the pavement; the back end of the machine features a powerful vacuum and a squeegee that sucks up the water and the debris it contains.”

The effectiveness of the machine, of course, is determined by how much dirt the machine actually picks up.  Ineffective machines simply move some of the dirt to a different location.  The worst street cleaner of all time, of course, as well as probably the stupidest machine ever devised, is the common leaf blower, which does not remove dirt but simply moves it to a less visible spot.