Osedax Live At the Bottom of the Ocean.  They Were Discovered On A Whale Carcass in 2002.

Among the ocean’s strangest inhabitants are some tiny worms that devour bones.  They inhabit and feed on dead whale skeletons and other bones on the sea floor.  It was recently discovered that they have a unique ability to release bone-melting acid which makes their lifestyle possible.

The worms are called Osedax, and like all worms in their family they get by without mouth, anus, or gut. The digestion of the bone they live on is made possible by their partnership with bacteria.  The worms are 3 to 4 cm long and they live in extremely hot and acidic vents in the sea. 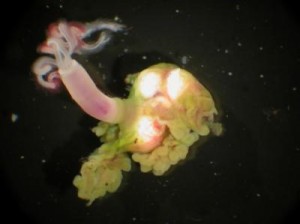 These “bone-devouring worms,” whose official genus name is Osedax, are known to both eat and inhabit dead whale skeletons and other bones on the sea floor. They have a unique ability to release bone-melting acid

While it had been clear that the worms and their bacteria rely on nutrients such as collagen or fat from the bones they inhabit, until now it was a mystery how the worms penetrate the bone to access their nutrients. They appear to lack physical equipment necessary for drilling bone. The recently discovered process involves secretion of acid to demineralize the bone.

Researcher Sigrid Katz, perhaps the world’s foremost Osedax expert, says, “The discovery of Osedax shows that nutrition is even more diverse than we imagined, and our results are a step further in understanding the special relationship between the worm and its bacteria.”

Osedax are a female dominated society.  Males never grow beyond 1 mm.  In case you couldn’t tell, the worm in the picture is a female.