A 6-year-old Arabian horse named William, valued at  $150,000, bolted during a beach photo shoot and swam more than  two miles out to sea. After an ordeal that lasted almost 3 hours, the horse was rescued.  He was  exhausted and had some water in its lungs but is doing fine. 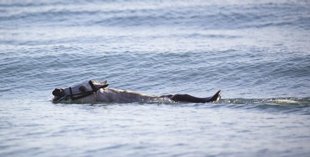 The horse's ability to survive the long swim was attributed to his excellent physical condition.