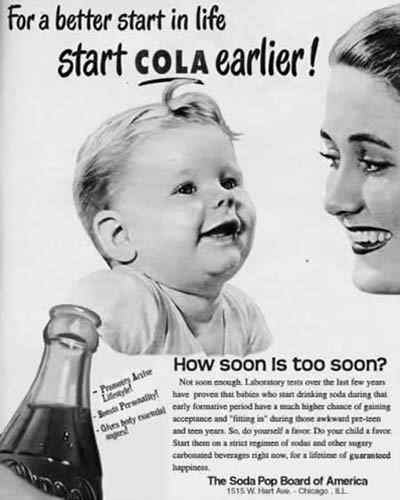 But bottled water is washing away the palate trained to drain a bubbly soda. By the end of this decade, if not sooner, sales of bottled water are expected to surpass those of carbonated soft drinks, according to Michael C. Bellas, chief executive of the Beverage Marketing Corporation.

“I’ve never seen anything like it,” said Mr. Bellas, who has watched water’s rise in the industry since the 1980s.

Sales of water in standard lightweight plastic bottles grew at a rate of more than 20 percent every quarter from 1993 to 2005, he said. The growth has continued since, but now it has settled into percentages within the high single digits.

If the estimated drinking of water from the household tap is included, water consumption began exceeding that of soda in the mid-2000s.

That significant shift has posed a tough challenge for the Coca-Cola Company and rival PepsiCo in recent years. While both companies sell bottled water lines, Dasani for Coke and Aquafina for Pepsi, they have had trouble establishing dominance in the more profitable business of so-called enhanced waters — including flavored and carbonated waters and those with added vitamins and minerals — where a horde of new beverage companies like TalkingRain, Hint water and Fruit2O are giving them a run for the money.

“Given where pricing has gone, I would assume that on the average 24 pack of bottled water, Coke and Pepsi are selling at break-even at best,” said John Faucher, who tracks the beverage and household products businesses at JPMorgan Chase. “The one thing keeping them in plain, old bottled water is that both have a very large and highly profitable single-serve business in it.”

Plain bottled waters are little more than purified tap water with a sprinkle of minerals tossed in, which makes the business one of producing bottles and filling them.

Factors as varied as innovations in bottling technology that have helped drive down the price of water as well as continuing concern about obesity and related diseases are also driving the trend. A recent study by North Dakota State University, for instance, used dietary intake data collected by the federal government to draw correlations between decreased consumption of soda from 1999 through 2010 and improvements in the biomarkers that indicated cholesterol and other chronic diseases.

A study by Coca-Cola asserted that the government’s data, the National Health and Nutrition Examination Survey, was flawed, but that had not stopped public health officials from encouraging greater consumption of beverages with less sugar.

Last month, Michelle Obama heavily endorsed water, teaming up with Coke, Pepsi and Nestlé Waters, among others, to persuade Americans to drink more of it. Health advocates complained that Mrs. Obama had capitulated to corporate partners by not explaining the benefits of water over the sodas they sell and that her initiative promoted even greater use of plastic bottles when she could have just recommended turning on the tap.

Bottled water has also grown cheaper, adding to its attraction. Cases of 24 half-liter bottles of store-brand water can be had for $2, or about 8 cents a bottle, and some grocery store chains even are using waters as loss leaders to attract customers, teeing up shopping carts with a case already on board.

Companies like Niagara Water, a privately held company that is the largest private-label water bottler in the country, have a fully integrated, highly automated production system that starts with plastic pellets that are made into bottles and goes all the way through to filling the bottles, making caps and screwing them on.

This poses a problem for the big beverage companies selling branded waters. “Coke and Pepsi can compete in convenience stores where water is being sold one bottle at a time, but they can’t make money on selling cases at $1.99 apiece,” said John Sicher, publisher of Beverage Digest.

In a conference call with analysts last week, PepsiCo’s chief financial officer, Hugh F. Johnston, said that the company had no plans to invest in increasing its bottled water offerings. “We don’t think it creates value over time,” Mr. Johnston said.

Some of the things that have made Pepsi and Coke formidable competitors in the soda business work against them in water. The companies, for instance, stock grocery store shelves directly off their trucks. That gives them more extensive and timely information about how their products are doing and greater control over marketing, but it also is much more expensive than the distribution system used by companies like Niagara and Nestlé Waters, which has a private label business in addition to marketing brands like Poland Spring and Ozarka.

Those companies let retailers handle stocking, shipping pallets of their waters to warehouses.

Both companies’ soda sales fell in North America over that time but grew internationally. Volume sales of soda, however, may be deceptive. “The volume growth is there, but when we’re talking about international markets like China, India and Latin America — prices are lower,” said Jonas Feliciano, an industry analyst at Euromonitor.

The TalkingRain Beverage Company, a bottled water business that started in the Pacific Northwest, is getting out of the plain water business altogether because the economics are so bad. “The water business has become very commoditized,” said Kevin Klock, its chief executive. “Folks in that business have to produce high quantities at fast speed in very light bottles, and it requires a huge investment to be in that game.”

TalkingRain makes Sparkling ICE, a bubbly water that comes in flavors like kiwi strawberry and blackberry with no calories and “vitamins and antioxidants.” The brand had developed strong consumer loyalty in the company’s back yard, consistently generating about $10 million in sales a year when Mr. Klock decided to bet big on it after taking the helm in 2010.

Last year, TalkingRain sold $200 million worth of Sparkling ICE, and sales this year are on track to exceed $400 million, Mr. Klock said. “There’s a large market out there that wants something sparkling, something flavored, something without a controversial sweetener, and we hit that market,” he said.

Now Pepsi and Coke are scrambling to dip their toes into it, too. They are fighting back with investments in flavored and enhanced waters and, in Coke’s case, packaging. Dasani, Coke’s primary water business, comes in the company’s PlantBottle, at least 30 percent of which is made from plant materials.

“First, consumers who purchase Dasani are looking for a high quality product that delivers a high quality taste time and time again,” said Geoff Henry, brand director of Dasani. “Beyond what the brand stands for, we are looking to lead in packaging and sustainability because those things also matter to our consumers.”

On Thursday, Coke introduced its first sparkling Dasani drinks in four flavors, and Pepsi is expected to take the wraps off a premium bottled water product called OM this year, according to Beverage Digest.

Coca-Cola has also been successful with Smartwater, which was part of its $4.1 billion purchase of Glaceau, the maker of Vitaminwater. Smartwater is little more than distilled water with added electrolytes, but volume sales were up by 16.2 percent in the first half of this year, according to Beverage Digest.

Dasani also has introduced Dasani Drops, with flavors like cherry pomegranate and pink lemonade, which consumers add to the drink to fit their taste, a quality especially prized by millennials.

A bumper crop of flavor drops has been coming onto the market ever since Kraft introduced Mio in 2011. SweetLeaf and Stur, for instance, are Stevia-based sweeteners for water that impart flavor. Pepsi recently began selling Aquafina FlavorSplash drops.

Sales of most branded enhanced water, however, were down in the first half of 2013, and whether giving consumers the option to flavor plain water will change that equation remains to be seen. Vitaminwater’s volume sales slid 17.3 percent, for instance, while SoBe Lifewater, a line of flavored waters owned by PepsiCo, dropped 30.3 percent, according to Beverage Digest.

On the other hand, Nestlé and bottlers like Niagara, which carry lower prices, saw sharp increases in volume sales of their enhanced waters.

“Is it a great idea? Not necessarily,” Mr. Faucher said of the big companies’ push into enhanced waters. “Do they have much of a choice? Not necessarily. People want variety and so Coke and Pepsi are going where the opportunity is. There aren’t a lot of other options.”