The most famous work of American art that almost nobody has ever seen in the flesh is Robert Smithson’s ”Spiral Jetty”: 6,650 tons of black basalt and earth in the shape of a gigantic coil, 1,500 feet long, projecting into the remote shallows of the Great Salt Lake in Utah, where the water is rose red from algae.–NY Times.

In 1970, when artist Robert Smithson executed  his famous “earthwork” that extends into the Great Salt Lake, the lake’s water level was exceptionally low because of a severe drought. The work cannot be seen when the lake’s water is at normal levels.

As New York Times Magazine explains, “Smithson anticipated that the lake would rise and fall, the residue of salt crystals causing the black rocks to glisten white whenever the water level dropped. But he miscalculated. Spiral Jetty was visible for about two years, then became submerged and stayed that way except for a few brief reappearances.”

Because of that minor miscalculation, the only time you can see “Spiral Jetty” peeking above the water is when the levels are below 4,195 feet. This is likely to happen during a drought (like the one that occurred during the initial building of the Jetty), but in recent years, water levels have been dipping below the historic average (4,200 feet) more often than usual, likely as a result of what many scientists speculate are man-made influences. 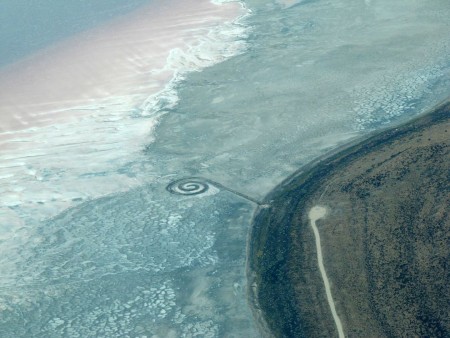 The Spiral Jetty from the air.