A New Style Water Treatment Called ADMIN Is Being Tested in Waurika, Oklahoma

Editor’s Note:  The town of Waurika, Oklahoma is faced with a dilemma common to many small water suppliers.  The town is being fined for failure to comply with water quality regulations governing disinfection by-products,  but it lacks the money needed to upgrade its water treatment system.  The article below describes a quick fix that Waurika has decided to try.   NSF, incidentally, does not stand for “National Science Foundation.”   The  article is reprinted from the Waurika News-Democrat.  –Hardly Waite.

WAURIKA — When it came his turn to vote, Bill Everett sat staring at the paperwork in front of him. After nearly two minutes of what could be called a “poignant pause,” the Waurika City Commissioner finally spoke.

Just minutes before, Vice Mayor Carole Eakin had cast the lone “no” vote in taking action on the city signing a contract with Enid-based GPM Environmental Services, which would commit Waurika to testing a water purification product called ADMIN.

The project calls for the city to spend nearly $25,000 to purchase a two-month supply of ADMIN. If the test goes well, the substance will become a permanent part of the water purification process. 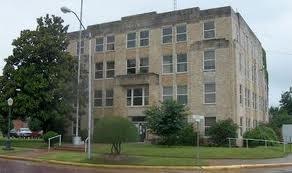 The 4-1 vote and Everett’s reticence prior to agreeing to the purchase came early in the City Commission and Waurika Public Works Authority regular meetings for May. It followed a 40-minute discussion with GPM representative Johnny Henderson.

He had also addressed the city administrators at their April meeting, presenting ADMIN as a possible solution to Waurika’s long-standing problem with trihalomethanes in its water system.

For years, the city has received almost monthly consent orders from the Department of Environmental because water tests showed TTHM counts that exceed DEQ regulations. The problem eventually drew a negotiated fine of $7,500 from the DEQ, which the city will have paid off at the end of June.

The commissioners and WPWA Trustees have been considering the possibility of investing over $3 million for replacement or massive renovation of the Waurika Water Treatment Facility as a solution to the TTHM situation and other problems associated with the city’s water and sewage system.

City administrators, facing an uncertain economic future, hope a solution — possibly, ADMIN — can put a multi-million dollar program at the water plant on a back burner.

During the discussion, Henderson reiterated that ADMIN would eliminate use of chlorine and chloramine as disinfectants. He provided endorsements from several Oklahoma counties and communities — Nowata, Vinita and Barnsdall among them — that are having success with the product.

Nowata began using ADMIN in November 2012, but a concern for Everett and new Commissioner Jeremie Wilson was “that no plant has used it longer than six months,” Wilson said.

Pointing out ADMIN’s pH count is .2 to .5, “which is very low,” Henderson said, “At 50 parts per million (gallons of water), it won’t chew into any piping system.” He also pointed out the product is certified by the National Science Foundation (NSF).

Henderson said the chemicals in ADMIN “won’t be acidic to the distribution system at all.” Still, injecting a new substance into the water system was a concern for Everett, and Eakin said that was a key reason she voted against the purchase.

When the discussion moved to funding the ADMIN test, Bernard tried to negotiate a month of free use, but Henderson said that wasn’t possible. He did, however, say, “If (ADMIN) doesn’t lower TTHM’s to reasonable levels, you don’t have to pay for the test.”

Ultimately, Commissioner Gayle Johnson made a motion for the city to enter into a two-month test of the product, which also stipulated Henderson must be present when ADMIN is injected into the water system.

“I want verification from you that we’ve set it up right,” she told Henderson, who agreed to be present.

Funding for the two month test will come from the 6 Percent Fund in the General Fund.

City Manager Chuck Brown reminded the commissioners the ADMIN distribution is exclusive and is not part of the city’s other project dealing with repairs at the water plant and the sewage system.

At present, the city is in the process of trying to obtain a Community Development Block Grant of $350,000 to fund repairs at the water plant and sewer lifts. That project is being overseen by engineer David Wyatt.

In March, the city approved a rate hike of $5 per month to water and sewer bills to create a fund for the maintenance project.